[Video below.] Soldiers in Israel’s Navy who set sail last week on a mission to stop an alleged Iranian weapons shipment from reaching Gaza terrorists celebrated Shabbos together by singing Shalom Aleichem and then making Kiddush and having a seudah.

“As Shabbat began last week, these soldiers had already set sail to stop Iran’s weapons shipment from reaching Gaza terrorists. In the middle of the sea, they all sang ‘Shalom Aleichem’ – a Shabbat song meaning ‘peace be upon you,'” the IDF said. “Days later, their successful mission brought peace upon the entire nation of Israel.”

The members of elite naval commando unit Shayetet 13 gathered below deck to sing together. The soldiers, who mostly wore yarmulkas, put their arms around each other’s shoulders and swayed back and forth as they prayed. After the song was over, one soldier stepped forward and made Kiddush.

Days later, the unit successfully intercepted the arms shipment in the Red Sea. The boat, named KLOSC, was headed to Sudan, 1,500 miles from Israel.

One of the weapons captured, the M-302 missile, is made in Syria and is based on Iranian technology, Israel’s Walla reported. IDF Chief of Staff, Lieutenant General Benny Gantz, oversaw the operation and gave the order to Major General Ram Rothberg, head of the Israeli Navy, to seize the KLOSC, the IDF said earlier this week.

Watch the video of Israeli commandos celebrating Shabbos below: 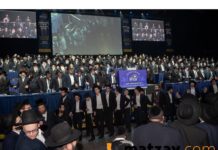 Photos: At the Siyum Hashas in London (JDN) 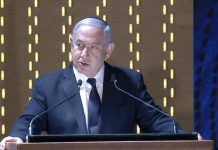 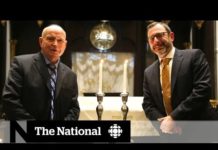