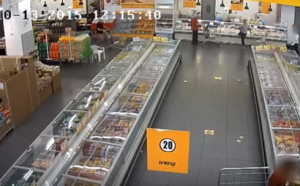 Police on Sunday released security-camera footage of an attack last month by an Israeli Jewish man, who stabbed a Jewish supermarket employee he mistook for an Arab.

The video clip shows a 33-year-old man approaching Uri Razkan from behind and stabbing him as he was stocking shelves in a grocery store in Kiryat Ata, near Haifa. After a brief scuffle, Razkan manages to run away, chased by the attacker.

The attacker was subdued by shoppers shortly after and Razkan was hospitalized with light to moderate injuries.

Earlier on Sunday, the attacker was charged with attempted murder after confessing last week to perpetrating the hate crime.

According to an early account of the October 13 incident, the attacker first approached an Arab man in the supermarket and asked him if he was Arab. The man said he was not.

Minutes later, the attacker spotted Razkan, concluded from his appearance that he was Arab, and proceeded to stab him in his upper torso.

“I heard a shout, ‘You deserve it, you deserve it, Arab…!’ When I turn around, I see a man. I shouted to him, ‘I’m a Jew,’ but he tried to continue. I just ran away; otherwise I would have been killed,” Razkan later told Army Radio.

The attack came amid an ongoing spate of Palestinian stabbing attacks against Israelis in Yerushalayim and elsewhere that have raised tensions and fears across the country and in the West Bank.