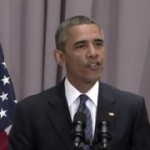 President Barack Obama on Tuesday compared Syrian refugees to Jews who sought to escape the Nazis.

“In the Syrian seeking refuge today, we should see the Jewish refugee of World War II,” Obama said at a naturalization ceremony, held at the National Archives Building in Washington, DC.

The president spoke about the US being a welcoming society and how immigrants and refugees “revitalize and renew” America. He also compared the current influx of immigrants to the waves of German, Scottish, Irish and German immigrants of the past. “In the Muslim immigrant today, we see the Catholic immigrant of a century ago,” he said.

The naturalization ceremony, held on the 224th anniversary of the ratification of the Bill of Rights, featured 31 newly sworn American citizens from more than 25 countries. The ceremony comes after at least 24 Republican governors have vowed to ban the entry of Syrian refugees into their states. Republican presidential candidate Donald Trump also called for a ban on the entry of all Muslims into the US.

Listen to President Obama’s full speech in the video below: