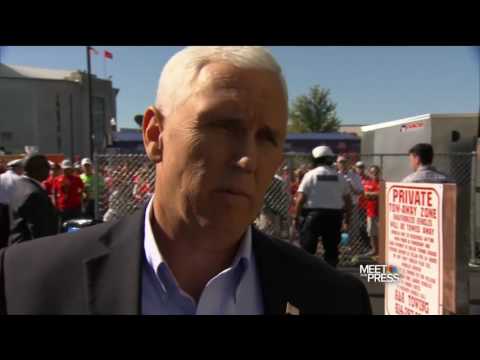 Hillary Clinton is the most dishonest presidential candidate since Richard Nixon, Indiana Governor Mike Pence said a day after the FBI released a report on its investigation into the Democrat’s email usage as secretary of state.

Donald Trump’s running mate, in an interview conducted Saturday with NBC News’ “Meet the Press” that aired Sunday, also said he planned to release his tax returns “in the next week” and that Trump also would at an unspecified date.

The Republican said Clinton’s handling of emails “disqualify her from serving as president,”

“She either knew or should’ve known that she was placing classified information in a way that exposed it to being hacked and being made available in the public domain, even to enemies of this country,” Pence said.

The comments follow the Federal Bureau of Investigation’s release Friday of a 58-page summary of its investigation into Clinton’s use of a private email server while serving as the top U.S. diplomat.

Although the documents lacked startling revelations, they gave context to FBI Director James Comey’s evaluation that Clinton had been “extremely careless” in handling sensitive government communications.

“What’s evident from all of the revelations over the last several weeks is that Hillary Clinton operated in such a way to keep her emails, and particularly her interactions while secretary of state with the Clinton Foundation, out of the public reach, out of public accountability,” Pence said.

Democratic vice presidential nominee Tim Kaine said in an interview on ABC News’ “This Week With George Stephanopoulos” on Sunday that the notes released clarified why the FBI decided not to move forward with additional proceedings.

“She did make a mistake, and she made it by deciding she wanted to use one device rather than multiple devices,” Kaine said. “She’s apologized for that. She said it was a mistake and she’s learned from it.”

Turning to his own campaign’s level of transparency, Pence said Trump would do as decades of Oval Office hopefuls have done and release his tax returns, although not until the completion of an Internal Revenue Service audit. Asked whether that would occur before the Nov. 8 election, Pence replied, “We’ll see.”

Trump’s campaign manager, Kellyanne Conway, said Clinton was having a hard time being accepted as a truthful and honest candidate in an ABC interview following Kaine’s.

“The American people want this election to be about honesty and trustworthiness and her being more accessible and forthcoming in her responses,” she said.