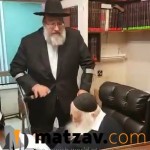 A visitor from America suffering from a foot ailment visited Rav Chaim Kanievsky, seeking a brachah and advice.

Rav Chaim advised the man not to have surgery done. The man responded that his doctor had told him that “without surgery, it will not be possible” to heal him.

Rav Chaim responded that “doctors only know what it is in their ‘kup’ (head).”

“So what should I do?” asked the man.

Rav Chaim answered that he should learn the perek of Keitzad Haregel in Maseches Bava Kama, studying both the Bavli and the Yerushalmi texts of the perek.

The man departed from Rav Chaim a bit puzzled, but determined to do what the gadol had told him. He was experiencing immense pain in his legs, but he began learning Keitzad Haregel as Rav Chaim had instructed.

A short while later, the man received a phone call from his doctor’s office, advising him that it is good that they didn’t do surgery, for it would have been extremely risky.

The following is a video of Rav Chaim advising the man: