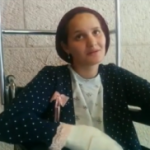 Adelle Benita, the 22-year-old Israeli mother-of-two who was seriously wounded in a stabbing attack in the Old City of Yerushalayim on October 3, was released from the hospital Tuesday, during what would emerge as the toughest day of the Palestinian terror wave that has washed over Israel since last month.

Adelle — whose husband, Aharon, was killed in the attack (along with Old City resident Rabbi Nechemia Lavi) – left the Hadassah Medical Center on Mount Scopus with her two-and-a-half-year-old son, Natan, in tow. Natan was also injured during the attack, and has been hospitalized with his mother since the tragedy, that occurred 11 days ago.

“It is unfortunate that my injury has come to symbolize the current wave of terrorism,” Adelle told Israeli website NRG from the wheelchair in which she was being escorted off the premises, as her toddler played with toys on the floor nearby.

The “injury” to which she referred consists of 17 stab wounds to her body. She became unwittingly famous for her ordeal, when cellphone camera footage emerged, backing up her story that the Arabs in the shops on the street where she and her husband were attacked merely laughed and spat when she begged for their mercy and their help. She continued to cry out, as she dragged herself to a spot where Border Police could see her, with a knife lodged between her neck and shoulder.

As a result of the incident, Prime Minister Netanyahu ordered that the shop-keepers in question be investigated, and their stores closed for business until further notice.

“I am certain that the authorities will do everything in their power, to enable us to resume living in security, as we had been used to doing for the past few years,” she said. “I am leaving here wounded and hurt, both emotionally and physically. I am bearing 17 torn ligaments that have not yet healed, and thousands upon thousands of stab wounds to my soul that will never ever heal.”

Asked whether she had any special message for the public during these trying times, Adelle responded, “Through the strength of unity, we will win. We are like one big family – the family of the people of Israel.”

She also thanked Netanyahu and Internal Security Minister Gilad Erdan, but gave special thanks to Sara Netanyahu, the wife of the prime minister, for her “assistance and encouragement.”

Watch the interview with Adelle below: