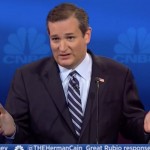 During Wednesday evening’s CNBC Republican primary debate, Sen. Ted Cruz took on the role of media critic, lashing out at the moderators for their antagonistic questions that seemingly aimed to draw out friction between the candidates, Andrew Kirell reports for the Daily Beast.

When asked by Carlos Quintanilla whether his opposition to a bipartisan budget deal makes him less appealing a leader to voters, Cruz used his allotted time to rail against the “mainstream media.”

“The questions asked in this debate illustrate why the American people don’t trust the media,” he said. “This is not a cage match. ‘Donald Trump, are you a comic book villain?’ ‘Marco Rubio, why don’t you resign?’ ‘Jeb Bush, why have your numbers fallen?’ How about talking about the substantive issues?”

When Quintanilla attempted to push back on the senator, Cruz continued anyhow: “I’m not finished yet. Contrast that with the Democratic debate, where every thought and question from the media was, ‘Which of you is more handsome and why?'”

Despite being warned that he only had 30 seconds left to answer the budget question, Cruz pressed onward with the media-bashing. “Nobody believes that the moderators have any intention of voting in a Republican primary. The questions being asked shouldn’t be trying to get people to tear into each other.”