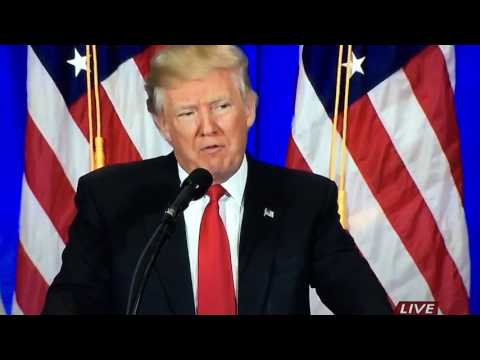 President-elect Donald Trump said today that he was offered $2 billion a few days ago to make a deal in Dubai with a major property developer but turned it down because he didn’t want to have a conflict of interest after his election.

“Over the weekend, I was offered $2 billion to do a deal in Dubai with a very, very amazing man, a great developer from the Middle East,” Trump said at his first press conference since the election. “I turned it down. I didn’t have to turn it down.”

He was referring to Hussain Sajwani, chairman of Damac Properties Dubai Co. The company already has two golf resort development deals with Trump in Dubai which paid him as much as $10 million in 2015 and the first part of 2016, according to his financial disclosure filed last May.

“Damac confirms that discussions took place but, as stated, they were declined. These were proposals for different property deals,” Damac’s spokesman Niall McLoughlin said by phone from Dubai. He declined to say whether those deals involved properties in Dubai or when the talks took place.

Sajwani and his family attended Trump’s New Year’s Eve party at his Mar-a-Lago resort in Florida, where Trump praised his Dubai partner. It is unclear if that was where Trump and Sajwani discussed additional property deals.

Trump first announced a licensing and management deal with Damac in 2014, with plans to sell 100 luxury villas surrounding a Trump-branded golf course which is due to open later this year. A second Trump golf course with Damac is being designed by Tiger Woods.

“I have no conflict of interest situation because I’m president,” Trump said. “But I don’t want to take advantage of something.”

Trump went on to lay out his plan to step down from positions in his business and place his holdings into a trust, an approach worked out by ethics lawyers but criticized by others as insufficient.