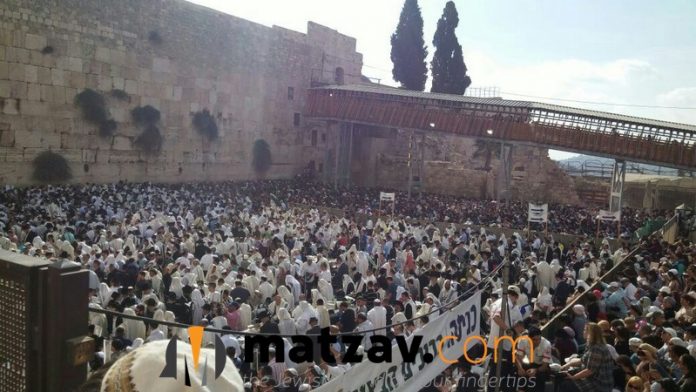 [Multiple videos below.] Tens of thousands of Yidden attended a mass Birchas Kohanim this morning at the Kosel. The large Birchas Kohanim is held every Chol Hamoed and draws tremendous crowds.

The entire Old City of Yerushalayim was closed to vehicles as thousands streamed by foot and via bus to the Kosel. Some had davened Shacharis elsewhere, while others took part at minyanim at the Kosel. All joined together for the central Birchas Kohanim,with the Kosel chazzan calling out the bracha over a microphone. Literally hundreds of kohanimgathered at the front of the minyan, right by the Kosel, to bentch their fellow Yidden.

After davening, many in the crowd went to greet the Israeli Chief Rabbis and Rav Shmuel Rabinovitch, rov of the Kosel, to receive their bracha and wish them chag sameiach.