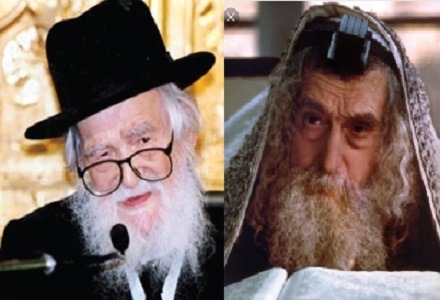 It was the early 1980’s and *Rivka was in trouble. She had a difficult life growing up and unfortunately had ended up marrying Mahmoud, an Arab. Like too many others, she was ensnared by his deceiving ways, (he spoke a perfect Hebrew) and by the time she realized her tragic mistake, it was too late. She was subject to a life of abuse and horrors. Despite the difficulty, she feared for the life of her three children, two girls and a boy… so she stayed. She was afraid what would happen to them if she ran away. She was also expecting a fourth child at the time.

One day she received a call from her husband’s boss. Mahmoud had an accident at work. He touched a live wire and was electrocuted to death. She was free.

She had known about the rescue organization Yad L’Achim for quite a while but was afraid to reach out. Although her husband was dead, she was still afraid of her husband’s family. She discovered that there was a Yad L’Achim office in Haifa, near her village. One day, she ran away with her children and burst into the Yad L’Achim office asking for help. Yad L’Achim immediately sprung into action. They were able to help Rivka and her three children and bring her to a safe house in Eretz Yisrael.

Yad L’Achim soon realized that Rivka’s life was still in danger. Mahmoud’s family was threatening her and her children and were looking for ways to find out her location. Yad L’Achim went to consult with HaRav Shach zt”l about what to do about this specific case. Rav Shach advised Yad L’Achim to get Rivka and her children to America. Once in America, Rav Shach encouraged that they should try and be placed into Satmar schools.

Heeding the Rosh Yeshiva’s advice, Yad L’Achim was able to get Rivka and her three children safely to America specifically to a family in Williamsburg who was in charge of ensuring her well being in the States.

Rivka gave birth to a healthy baby boy in America. Unfortunately due to various circumstances, Rivka was incapable of raising her children and with the guidance of Gedolei Yisrael, suitable homes were sought who could adopt and raise these precious children.

Upon the guidance of Rav Shach that the children ideally be placed in Satmar institutions, local families were sought who could fulfill the great mitzvah of taking in these children.

A Yad L’Achim staffer in the states sought the blessing of the Satmar Rebbe, the Beirach Moshe zt”l. The Rebbe immediately took money out of his pocket to help the children. When told that all that was requested was the Rebbe’s bracha so that these children be placed in his insititutions, the Rebbe replied, “How can you deny me the zechus (merit) of helping Yad L’Achim and these children?” He then gave his enthusiastic bracha for success while welcoming the children.

Amazingly, three families, including two from Williamsburg, readily offered to adopt three of the children and raise them as their own. And indeed these children who grew up in an Arab village were now learning aleph-beis and growing up to be healthy, succesful Jews.

There was one girl left who had not yet found a home. A couple from Flatbush reached out and beseeched to be allowed to adopt the youngest girl. Here was their story: They were not blessed with children for over fifteen years and had approached the Ribnitzer Rebbe zt”l for a bracha that they merit having a child. The Ribnitzer gave them a unique bracha; he told them that if they would adopt a Jewish child in need and raise that child as their own, they would merit having their own offspring. It seemed to come full circle as the Ribnitzer Rebbe was a staunch supporter of Yad L’Achim. The Rebbe attended Yad L’Achim events, contributed from his own money and gave his bracha to whomever supported them and their work of Pidyon Shvuyim.

They were a special , warm couple and seemed to be a perfect fit for the precious child. They adopted the youngest girl Sara. Eleven months later, the Ribnitzer Rebbe’s bracha was fulfilled with the birth of a baby girl. They now had two girls in their family.

Today, these four children are married, having raised frum Jewish families of their own. And yes, the two boys who grew up in an Arab village, today wear shtreimels on Shabbos.

You can submit names (for FREE) to be davened for at the Ribnitzer Rebbe’s Kever on his yahrtzeit (Monday) through Yad L’Achim (no minimum donation required) by CLICKING HERE or the image below or by visiting WWW.YADLACHIM.ORG or call 1-866-923-5224 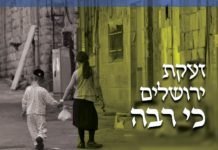 Urgent Message from Rav Gamliel: Yerushlayim, We Did Not Forget About You! 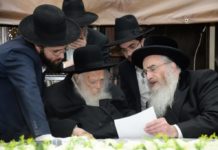 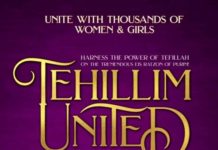