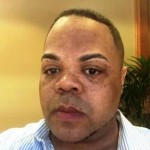 The disgruntled former television reporter who murdered two of his former colleagues during a live interview Wednesday morning had a long history of erratic behavior at various workplaces, including acting aggressively toward co-workers and claiming racism was behind uncomplimentary evaluations.

Flanagan, who reported under the name Bryce Williams, was hired by WDBJ, based in Roanoke, Va., in March 2012. He only lasted 11 months at the station, and The Roanoke Times reported that his outbursts alienated and terrified co-workers.

“He quickly gathered a reputation as someone who was difficult to work with,” station president and general manager Jeff Marks told reporters Wednesday. Justin McLeod, a former WDBJ reporter, told the paper that Flanagan “had anger management issues that went beyond anger management.”

“Photographers flat-out refused to work with him,” McLeod added. “He called them all racists. He threw that word around a lot. Nobody believed it.”

According to documents filed in connection with a racial discrimination suit against the station by Flanagan in 2014 and seen by The Daily Beast, WDBJ colleagues said he often made them feel “threatened or uncomfortable.” In one incident, Flanagan allegedly rounded on a station cameraman who was shooting b-roll footage using a shoulder-mounted camera.

“I’m not trying to be an [expletive], but the shaky video isn’t going to work,” Flanagan allegedly told the cameraman before turning to an interview subject and saying, “I’m sorry sir, the footage he just shot is completely unusable.”

In November 2012, Flanagan was reprimanded by station bosses for wearing an Obama sticker, a violation of a non-partisan condition of his contract. But matters came to a head in February 2013, when Flanagan was told he was being dismissed.

According to court papers, an agitated Flanagan responded to the news by angrily saying, “I’m not leaving. You’re going to have to call the [expletive] police. Call the police, I’m not leaving. I’m going to make a stink and it’s going to be in the headlines.”

Dan Dennison, the news director who hired and fired Flanagan, recalled in the documents that Flanagan’s ranting alarmed station employees, some of whom took shelter in a locked office. Dennison also said Flanagan handed him a small wooden cross and said, “You’ll need this.”

Police eventually escorted Flanagan out of the building, but he still lived in the area, which McLeod said caused disquiet among some of his former co-workers.

“A couple of months ago, somebody told me, ‘Bryce is still in town,'” McLeod told the Roanoke Times. “Several former colleagues were bothered by the fact that he still lived in town.”

WDBJ was the last stop for Flanagan in a reporting career that took him to places like Greenville, N.C., Midland, Texas, and Savannah, Ga. Tarcia Bush, a news producer who worked with Flanagan at WTOC in Savannah, recalled him as “a good guy” in an interview with WXIA in Atlanta.

“I just don’t know what happened to him in the years that followed,” Bush said. “It was very disturbing to see him and that guy who did that this morning was not the guy I knew. I don’t know this man.”