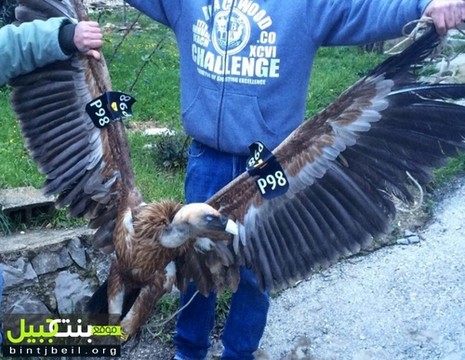 An Israeli vulture captured in Lebanon is being accused of espionage for the Jewish state, the news site nrg reported on Tuesday.

The vulture, released in a nature reserve in the Golan Heights a month ago, was found in the outskirts of Bint Jebail in southern Lebanon, some four kilometers (two and a half miles) from Israel’s northern border.

According to the Israel Nature and Parks Authority, no signal from the transmitter on the back of the vulture has been received since 2 p.m. Monday.

Lebanese media outlets are reporting that citizens who captured the bird interpreted the transmitter – and other markings used in the struggle to save eagles from extinction – as devices of Israeli espionage. In photos circulating on social media, the vulture is seen tied up with its wings spread, revealing these “espionage devices.”

An ecologist with the Israel Nature and Parks Authority told nrg that he had contacted everyone he could to learn about the vulture’s whereabouts and condition. He also posted requests on social media on behalf of the eagle, which was brought to Israel on an Arkia flight from Catalonia in July, and released in the Gamla nature reserve at the end of December. The purpose of this delivery, the ecologist explained to nrg, was to breed the vulture, an endangered species in the Middle East in general, and in Israel in particular.

“The claims of the Lebanese people are ridiculous,” he said, expressing worry about the fate of the eagle in the current cold weather and in the hands of people who might not be treating it properly. “Their statements are based on science fiction and hatred of Israel.”