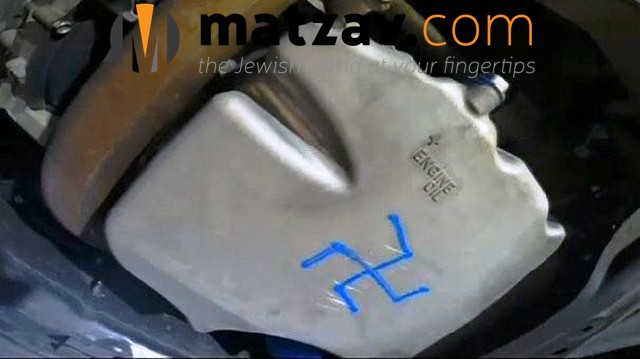 WSVN reports: A disturbing discovery for a South Florida couple after a routine oil change. They found a swastika painted underneath their vehicle.

Emily Pierre-Louis and her friend Josue Lubin got a big surprise – a blue swastika painted on the oil pan.

For three months, the young couple had no idea it was there. But when it was time for the next oil change, Josue took it to a dealership where the ugly symbol was discovered.

The swastika appears to be painted with sealant and it looks like somebody tried to scratch it off. The couple worried something else might have been tampered with.

Emily says the oil change went smoothly, so there is no reason why a worker would be unhappy with her. When she found out about the swastika, she called Wal-Mart to complain.

Emily Pierre-Louis: “First, they asked me if I was Jewish.”

And later they went to the store to complain in-person.

They say weeks passed and no one from the store ever responded. But it turns out Wal-Mart fired the worker, and says the couple should have been told.

A spokesperson sent this statement: “We hold our associates to high standards and this is unacceptable. As soon as we were made aware, we investigated the incident and the associate no longer works for the company. We apologize to the customer for this incident.” Read the full story at WSVN.