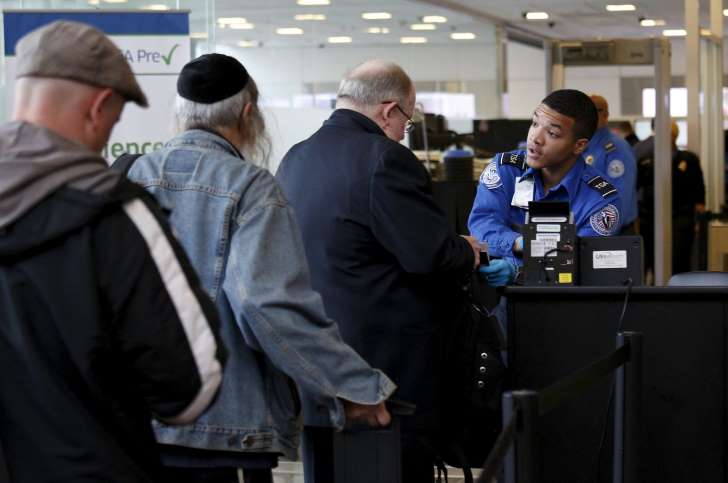 The Transportation Safety Administration has a simple message for all of you air travelers who would like to avoid long lines this summer at security checkpoints: Leave your knives at home.

Also your sword. Your brass knuckles. Your meat cleaver. Your dummy hand grenade. Your replica .38 special handgun. Your live rounds of ammunition. Your homemade halberd.

Yes, a homemade halberd. At least that’s what TSA officials think it is.

All this junk arrived at TSA security checkpoints in people’s carryon bags — 15 pounds a day worth, in fact, at Reagan National Airport alone, a TSA spokeswoman said.

On Friday, as a runup to a news conference featuring Director of Homeland Security Jeh Johnson promising that additional TSA screeners were on the way to reduce the long lines at airport checkpoints, the TSA was also showing off some of the dangerous items people have tried to carry through checkpoints.

My favorite was the ninja-wannabe who cut away the insides of a book – titled “Ninja: The Shadow Warrior,” by the way — in an attempt to hide two daggers inside the cavity. Besides binging on too many Bruce Lee movies (or episodes of “Get Smart”) — didn’t you think the X-ray machines might spot those, whoever you are?

The beautiful thing is that all this stuff would be legal to fly around with from city to city – so long as it went into the checked luggage.

As frustrated as people are by the absurdities of TSA screening – the Canadian flautist whose musical instruments were destroyed by a TSA agent because they looked like bamboo, the 6-year-old girl who underwent the sort of pat-down you’d see on “Hawaii Five-0” – air travelers are also justified in feeling frustrated by fellow travelers.

You’d think Americans by now would have gotten the message about carrying no more than 3.4 ounces of liquid in a single container – which, a TSA official said, is considered threshold size for known explosive substances to cause serious damage. They’re also trying to find plastic explosives that could be molded into the shape of a laptop battery or the sole of a tennis shoe, as the Shoe Bomber tried to do. But rules on liquid carry-ons are subtle compared with the commonsense notion that you might want to leave the replica Uzi at home – not to mention the real thing. In 2015 the TSA seized 2,653 firearms, the TSA says.

“All of this is going to slow down the checkpoint line,” TSA spokeswoman Lisa Farbstein said. “You show up with one of these? Checkpoint closed.”

Of course, social media has helped document the American schizophrenia on airport security. There are YouTube videos galore showing TSA agents working granny over or making little girls cry. But then you also have bozos who arrive at the checkpoint with toy gun or a fake grenade concealed inside a canister of cologne. You know it’s harmless, your frat brothers know it’s harmless, and now the TSA knows it’s harmless — but a flight attendant or an air marshal might not be so sure when you whip it out at 36,000 feet.

“When we criticize you today about having long lines and taking too long to screen people, next week, if there is a [security] breach, we will haul you up here and lambaste you for not being more thorough,” Rep. Stephen F. Lynch, D-Mass., told TSA Administrator Peter Neffenger during a recent hearing prompted by passenger complaints of long waits to go through airport screening.

And so the delicate task of keeping us safe and keeping us moving is in the hands of a giant federal bureaucracy. And if not them, a big business. Pick your poison.

The TSA a few years ago recommended easing the rule on allowing small penknives, souvenir baseball bats and golf clubs. But then unions representing pilots, flight attendants and air marshals complained that, sure, maybe a mashie wouldn’t be enough to break into the cockpit but might just cause plenty of mayhem in the cabin. The only sharp object allowed in carryon now is a disposable razor, the TSA website says.

To review: on Sept. 11, 2001, the World Trade Center and a big chunk of the Pentagon were reduced to cinders by jetliners that had been commandeered by terrorists using box cutters of the kind that you can buy at Home Depot for less than $5. We want to board our flights with a minimum amount of hassle. But we also want to get to where we’re going in one piece.

“You can put an explosive device in anything. I have seen a Kindle that was a bomb. You know how thin a Kindle is?” Farbstein said. “The imagination of the terrorists is what we’re dealing with.”

And the lack of same among some travelers. Here are some other things you can do — some of them admittedly obvious – to avoid being delayed or delaying others.

–Wear shoes that slip on and off easily.

–Sign up for TSA’ s “Pre✓” [PreCheck] program. The expedited screening service is open to low-risk passengers who qualify for the program and submit to fingerprinting and a background check. The federal government is working to promote the program and urging employers to reimburse the $85 fee, which is valid for five years.

–The TSA allows passengers to carry a quart-sized bag of liquids, aerosols, gels, creams and pastes in carry-on luggage. These items must be in travel-sized containers that are smaller than 3.4 ounces (100 milliliters) and carried separately in the small bag from the carry-on baggage.

For more ideas on getting through security faster, you can go to the TSA’s website here: https://www.tsa.gov/.