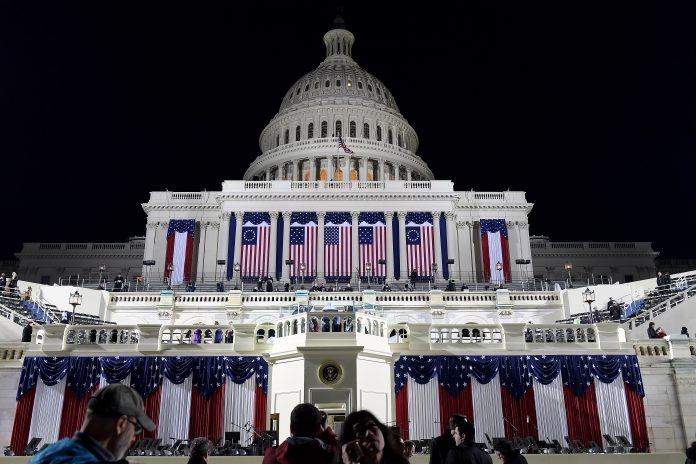 Through the clear, cool dawn, hundreds of thousands of people began descending on the nation’s capital Friday to celebrate, protest or simply witness the inauguration of the most unconventional president-elect in modern American history, Donald John Trump.

At noon, the Republican real estate mogul will take the oath of office and become the 45th commander in chief of the United States, capping a campaign that galvanized millions of Americans who were eager to embrace a Washington outsider willing to say, or tweet, whatever is on his mind. He was jubilant Friday morning.

“It all begins today!” he wrote on Twitter. “I will see you at 11:00 A.M. for the swearing-in. THE MOVEMENT CONTINUES — THE WORK BEGINS”

But his inflammatory rhetoric has angered and offended millions of others, making the 70-year-old New Yorker the most unpopular incoming president in at least four decades. Friday, the stark national divide was already on full display as Trump supporters and detractors began coming face to face on the National Mall, around the White House and throughout downtown D.C.

After almost two hours of delays, the security gates at 7th and Independence Avenue opened to cheers from the restless crowd.

Law enforcement is prepared to contend with more than 60 demonstration groups that plan to gather in the District, including DisruptJ20, which expects at least 30,000 participants. The activists’ website promised “a series of massive direct actions that will shut down the Inauguration ceremonies and any related celebrations.”

To do that, however, they’ll have to overcome a security plan that’s taken months of planning and millions of dollars to execute. Among the obstacles facing any would-be agitators: Checkpoints, roadblocks, truck-barricaded streets, hundreds of Jersey barriers, miles of fencing and 28,000 security officials deployed across 100 square blocks in the heart of Washington.

On Thursday night, hundreds of protesters clashed with law enforcement outside the National Press Club, where a thousand Trump supporters — including a number of infamous online trolls who campaigned for the new president — had gathered for the “DeploraBall.” In the street, demonstrators waved signs, chanted, shouted obscenities and set fires. One man who appeared to be a Trump supporter was struck in the head and left bleeding before police escorted him to safety. Several times, officers directed a chemical spray into the crowd.

On Friday, protesters may be confronted by counter-demonstrators who have come to support their new president — most notably, Bikers for Trump, a group that served as a vigilante security force at the Republican National Convention and expects 5,000 members in Washington Friday.

One bearded man in a North Face vest and sweatpants, clearly new to Metro, propped his feet on a divider and later asked if he could smoke his cigarette. He hopped off his seat to record a selfie video with his friends.

“It’s the best day in America,” he beamed.

The man swiveled the camera to show the rest of the crowd.

“Washington sucks,” he bellowed, before turning the camera off.

“I said grab them by the p–y 17 times yesterday,” he joked later, referring to Trump’s vulgar comments on the set of Access Hollywood in 2005. He casually repeated the phrase several times, until his female companion shushed him.

“Today’s a huge day,” he said as the train approached their stop.

Despite Trump’s reputation as a showman, the celebration in honor of the former “Apprentice” star — who has never before held elected office — will likely be smaller than the one in 2009 for the nation’s first African American leader.

Trump’s 3 p.m. parade is expected to last just 90 minutes. President Barack Obama’s took more than four hours. Trump is expected to appear at three official balls. Obama attended 10. As of last week, just 200 bus permits had been sought for Friday. Fifteen times that many – more than 3,000 – registered eight years ago.

Though Trump suggested “record numbers” of people would attend Friday’s festivities, at least one longstanding ball had to cancel due to a lack of interest, and others have struggled to sell tickets. Compared to past celebrations, far fewer notable celebrities and musicians are attending or performing, and a number of the city’s great halls haven’t been rented.

D.C.’s Trump International Hotel, which the new president will pass during his parade, has frequently been targeted by protesters in recent months. An extra layer of high metal fencing appeared outside its front doors this week, and staff have carefully monitored everyone coming and going.

Washington’s lack of enthusiasm for Trump’s arrival may be due in part to the adversarial relationship he’s long had with the fiercely liberal capital, a place he described as a “swamp” that needs draining.

Just 4 percent of D.C.’s residents voted for the man who’s about to move into the city’s most hallowed quarters: 1600 Pennsylvania Avenue.