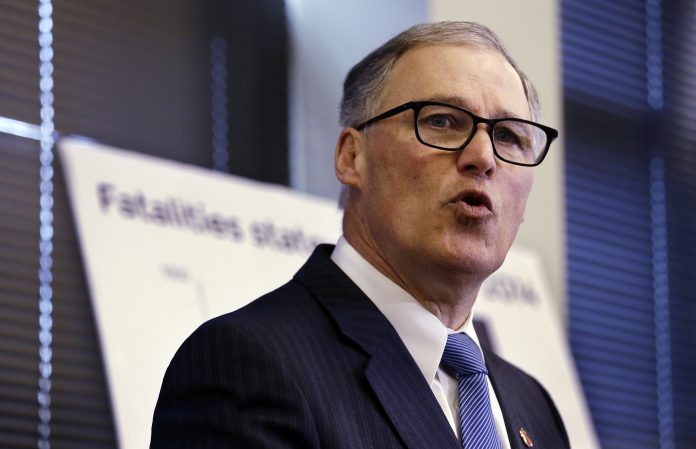 Washington Gov. Jay Inslee, who entered the 2020 contest by making the case that climate change is the central issue of our time, dropped out of the Democratic presidential race on Wednesday.

Inslee announced on MSNBC’s “The Rachel Maddow Show” that he was dropping out. He had argued when he declared his candidacy in March that addressing climate change – “the most urgent challenge of our time” – should be a top priority.

The two-term governor released a plan that called for a new Justice Department office to prosecute environmental laws and vowed to put at least 40 percent of federal investments in clean energy in communities disproportionately affected by income inequality, pollution and other climate-related impacts.

But he struggled to gain name recognition and wide support among his more nationally famous peers in the contest, with his poll numbers hovering around 1 percent or lower. An aggregate of polls by the site RealClearPolitics showed Inslee with a national average of 0.2 percent.

In a letter to supporters, Inslee said he was not meeting the polling threshold set by the Democratic National Committee to quality for debates in the fall, despite getting 130,000 campaign donors.

“As a result, I don’t believe we can compete for the attention and exposure needed to have a reasonable shot at the nomination,” he said.

Still, he said he believed his campaign had been a success by prompting other candidates to take the issue of climate change seriously.

“In recent presidential cycles, climate change got little attention from the candidates, the DNC, or the media,” he wrote supporters. “We vowed to change that in a big way and succeeded. Many of the campaigns started with little attention to climate, but since our campaign began, we’ve seen almost every serious candidate put out a climate plan; we’ve seen climate come up in both debates; and we now have two networks hosting nationally-televised climate forums in September.”

Inslee told Maddow that he felt hemmed in by the design of the televised debates, where candidates were given short amounts of time to answer on complex subjects such as climate change. He declined to make an early endorsement for any of the candidates but said he would support the eventual Democratic nominee.

“I think we’re going to be just fine, ultimately,” he said. “We just need to get to the business of unifying the party. I believe we will do that.”

Sen. Elizabeth Warren of Massachusetts, another Democratic candidate, on Wednesday tweeted a note of appreciation to Inslee.

“Climate change is real and it’s a crisis – and I will keep fighting alongside you to take bold action before it is too late,” she wrote.

Fellow candidate Sen. Bernie Sanders, I-Vt., echoed that sentiment. “Congratulations to @JayInslee on his impactful campaign to bing the climate crisis to the forefront of the national conversation,” Sanders tweeted Wednesday night. “There is no more important issue facing humanity. Together we will work to pass a Green New Deal and create millions of jobs.”

Greenpeace USA also praised Inslee for making climate change the focus of his campaign. “Inslee raised the bar for what’s expected of the next president on climate. Now, it’s up to every one of the remaining candidates to pick up where he left off,” the environmental group said in a tweet.

Inslee has worked to address climate change in Washington state but met plenty of resistance. A measure that aimed to reduce emissions by taxing carbon was defeated by Republicans in the legislature, and an executive order outlining steps to reduce carbon pollution was blocked by a judge.

The Associated Press, citing people close to Inslee, reported that he is likely to seek a third term as governor.