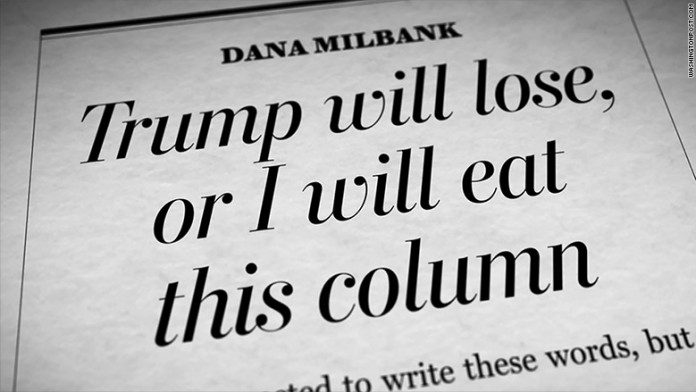 Will Dana Milbank eat newspaper-lined knishes or ground newspaper falafel? The Washington Post columnist has to choose a delicacy now that Donald Trump is the presumptive GOP nominee for president, CNN MONEY reports.

Last October, Milbank wrote that “I’m so certain Trump won’t win the nomination that I’ll eat my words if he does. Literally: The day Trump clinches the nomination I will eat the page on which this column is printed in Sunday’s Post.”

Now, with Ted Cruz dropping out of the race, Milbank says he’s going to act on his vow “as soon as I can.”

“The recipes we’ve assembled look quite promising,” he told CNN MONEY. “But we need time to assemble all the, er, ingredients.”