It takes a world class communicator like Rabbi Ephraim Wachsman to encapsulate Kinyan Hamasechta in a single story. It happened many years ago.  Rabbi Wachsman had just concluded a shiur on the importance, the beauty, and the blessing of Limud HaTorah. A young man approached him and said, “I support Torah. I want my kids to learn Torah. I love Torah  – until I take out a Gemara. I just don’t enjoy learning.” Rabbi Wachsman responded that every Yid has his own path to Torah, and when one finds that path, the enjoyment is  indescribable. “I give you a bracha,” he concluded, “that you should find your individualized path to Torah very soon.” With this, the discussion ended.

Now, at the Kinyan Hamasechta event held at the Bell Works Hall in Holmdel, New Jersey, Rabbi Wachsman relived that story. “It’s been twenty-five years, and those words still haunt me. I don’t know where that young man is today, but I hope he found Kinyan Hamasechta. Or rather, that Kinyan Hamasechta found him.”

As the Rov of a flourishing community of young Ba’alei Batim, I have good news for Rabbi Wachsman. Rest assured that Kinyan Hamasechta found him. Because it’s finding everyone ­ – everywhere. Here in Cincinnati, Ohio, our Kinyan Hamasechta chabura began as a small group of dubious risk-takers, willing to experiment what has been reported as a worthwhile endeavor. Then it exploded. The chabura doubled and tripled, and members began learning with a fervency and dedication that they had never imagined possible. Our experience is not unique. This is happening in communities all throughout the country, collectively numbering a staggering 108 chaburos.

Rabbi Wachsman, Kinyan Hamasechta found us! And it has, in your words, shown us our “individualised path to Torah.” Because that is the very nature of the program. Unlike other learning programs, Kinyan Hamasechta does not focus on the pace or quantity, but rather on the quality and clarity. Its primary objective is to encourage chazara. Through constant, tireless review, one develops a personal relationship with the Torah. It is a true kinyan – it is yours to keep, yours to cherish. This is the philosophy of Kinyan Hamasechta and the secret to its unparalleled success.

The extent of that success becomes evident once a year, at the Kinyan Hamasechta annual event. As Kinyan Hamasechta founder, Rabbi Dovid Newman, described, it is a “celebration of the ability of baalei batim to shteig – to own, live and love learning. It enables one to be the driver traveling through the  Gemara, not just a passenger coming along for the ride. And it’s a celebration of their dedicated wives who partner fully in this venture, intent on ensuring that their husbands continue to grow in Torah.”

No expense was spared on the lavish dinner, the multi-piece band, or hired singers at the event. But the gashmiyus paled in comparison to the Ruchniyus. True to its mantra, the event was kicked off by a chazara seder, participated by a crowd of 700 strong. The kol Torah was deafening and so, so beautiful. As we sat there together, enveloped in that ethereal roar, there was a prevailing sense that, somehow, Kinyan Hamasechta has become a family, forging its members together by a bond of common destiny.

As  this was going on, over 300 women were treated to an uplifting presentation by Mrs. Faigy Zelcer on the topic of a woman’s connection to Torah and her role in facilitating the transmission of the mesorah to her children. This was followed by an inspiring lecture by  Rabbi Yechiel Spero on the importance of the women’s role in supporting the learning of their husbands.

And then came the dancing. Hundreds of men dancing with that youthful, unbridled joy usually reserved for yeshiva bochurim on Simchas Torah. One participant related that he has not danced that way since his own wedding.

Speakers at the event included Rabbi Yitzchok Wagner, Rabbi Dovid Newman, Rabbi David Nakash, Rabbi Yehuda Orlansky and Rabbi Ephraim Wachsman. Rabbi Wagner, who organized the event and is a pioneer Kinyan Hamasechta Rosh Chabura, told the famous story of how the Netziv had almost left yeshiva to become a shoemaker. The Netziv would later recount with great emotion that had he become a shoemaker, when he would arrive at the gates of Heaven, they would demand, “Where are your seforim?” The Netziv would have replied, “Seforim? I’m just a simple shoemaker!” Here too, said Rabbi Wagner, if not for Kinyan Hamasechta, we might arrive at the gates of Heaven only to be demanded of, “Where are those thousands of Dafei Gemara that you learned and chazered over and over again?” But now, with Kinyan Hamasechta, when that question comes, one can stand to his fullest height, and show the endless accomplishment that Kinyan Hamasechta facilitates.

Rabbi Newman then shared some Kinyan Hamasechta statistics which, truth be told, are not really believable. At the first annual event a year ago, there were 27 chaburus and 250 members. One year later, there are 108 with over 1,250 chaburah members. This was done without marketing, there was no campaign or advertising blitz. Abaya and Rava do the advertising for us. But it’s even more than that. If there is one common denominator that every one of the bnei chaburah sees on a daily basis, it is siyata dishmaya. That siyata dishmaya is what allows one to chazer over and over again, even though our natural inclination is to focus on constantly learning new material.

Rabbi Newman was followed by Rabbi David Nakash, the co-founder of Kinyan Hamasechta. Rabbi Nakash quoted  the Nefesh Hachaim who writes that the performance of  612 mitzvos, with every possible enhancement, does not equal in value to the single mitzvah of Limud Ha’Torah. This event is celebrating, not only chizuk in Limud HaTorah, but chizuk to life itself. The stories don’t stop. Stories about how Kinyan Hamasechta has transformed marriages, magically succeeding to do what years  of therapy have failed to accomplish. Stories of adolescent children who find all-new respect for their father as they watch him huddled over his Gemara, seemingly unaware that he is on a family vacation. He shared the story of a businessman who works full days and, somehow, in between the cracks, found the time to learn Meseches Succah – get this – 25 times!

The final speaker was Rabbi Ephraim Wachman shlita. His dynamic speaking style is not something to be transmitted through the written word. Let me just share his final thought. He urged all those in attendance that we give our wives a present. A gift that doesn’t cost anything at all, but supersedes the value of the most expensive jewelry, or the most extravagant vacation. Bring your Gemara home. Sing Amar Abaya at the dining room table. Fill your home with its song, let its sweetness permeate and uplift your household. Your wives deserve it, it is the ultimate fulfillment of their Tefillos.

The evening ended with an uplifting kumzitz together with Eitan Katz. The neshomos of all present fused together through the power of nigun bringing an end  to a most special evening. The climax was the song Baruch Hu Elokeinu…Shehivdilunu min hatoim… the clarity of realization of how special Klal Yisroel is seemed to take a life on its own, lifting the crowd to its feet, once again breaking out in delirious, unadulterated joy. 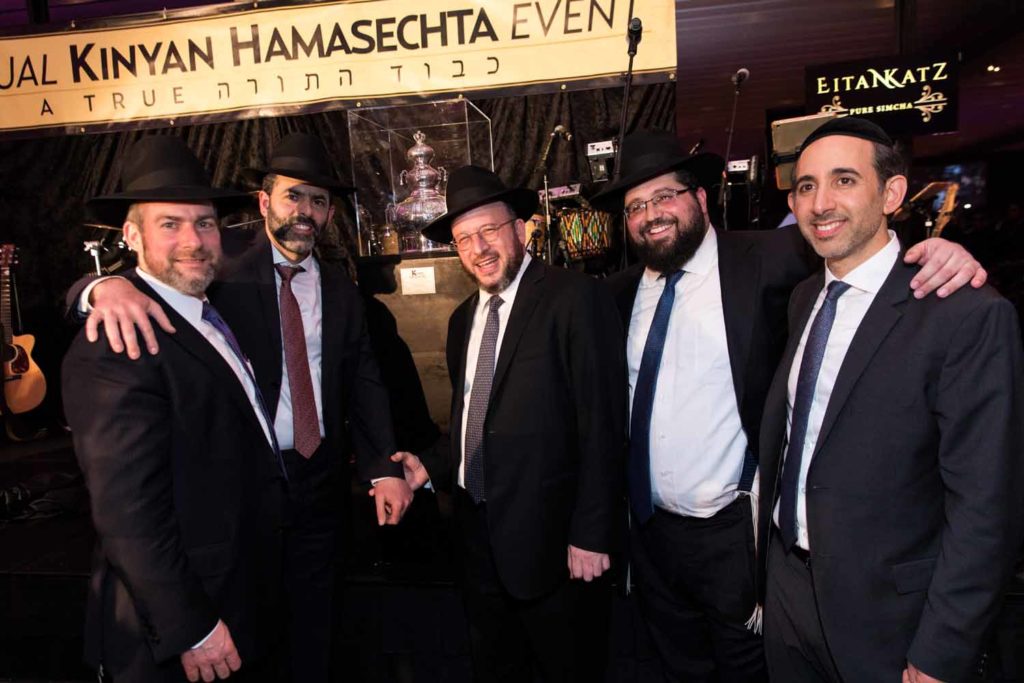 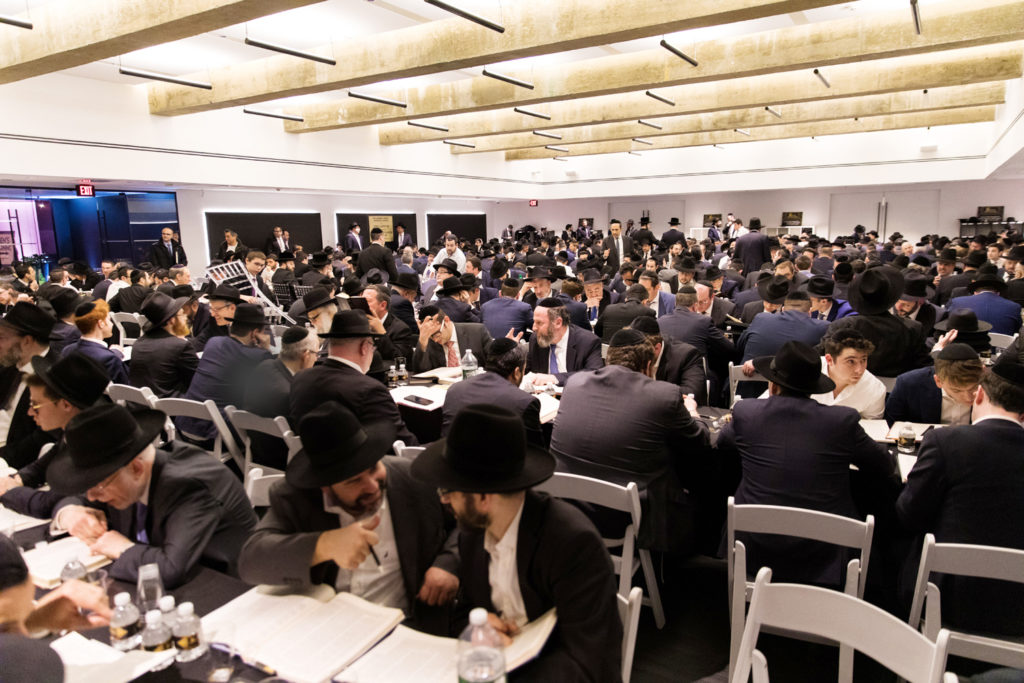 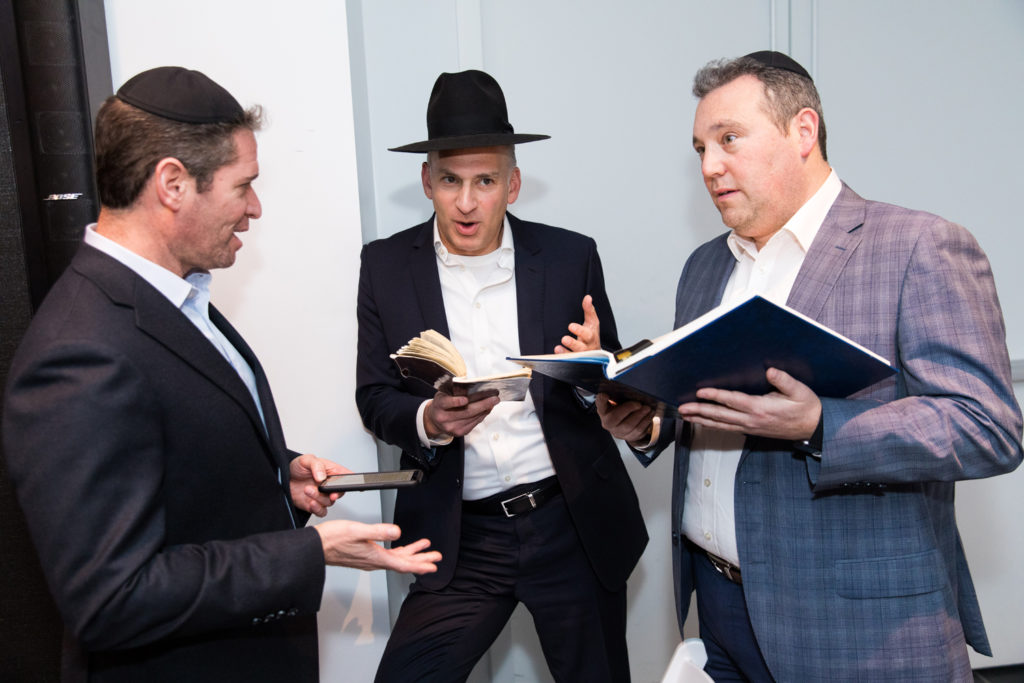