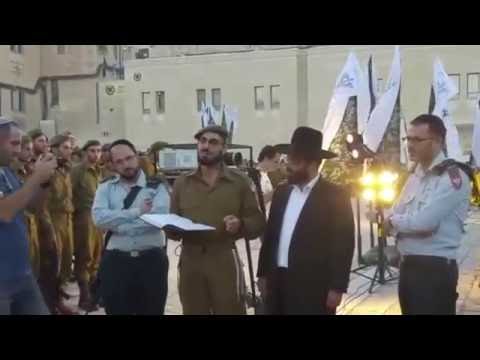 Soldiers from the Netzach Yehudah Battalion of Nachal Chareidi recruited at the beginning of the month celebrated their oath-taking ceremony at the Kosel.

For the first time in the history of this ceremony, a public siyum masechta was held at the event. Prior to commencing basic training in the military, the charedi soldiers collectively celebrated a siyum on Maseches Megillah, a commitment that they undertook to complete upon induction.

The oath-taking ceremony took place following the siyum, after which the new soldiers shouted, “Ani matzhir (I affirm!)” instead of the traditional “Ani nishbah (I swear)!” which has long been the practice in the IDF. The ceremony concluded with a rousing rendition of “Ani ma’amin.”

Addressing the audience who had come to watch the siyum and ceremony, the soldier who led the siyum on behalf of his company expressed that, “The Jewish nation approaches action out of learning. First, he learns, and then the action can be carried out in its ideal form. We at ‘Netzach’ act abiding by the Torah, which is why we are completing this masechta as our introduction to military service.”

Rabbi Yaron David, a rabbi from the Nachal Chareidi Foundation, said, “I want to say to the entire battalion that we’ve made history tonight! An induction ceremony along with a siyum masechta. May it be the will of Hashem that the merits of this siyum shall remain with you throughout your coming journey and safeguard you. May you benefit from boundless siyata diShmaya as you ascend in Torah and fear of heaven, with professionalism and absolute commitment to your goals as you fulfill this lofty mitzvah.”

Leave a Reply to Oy, Not Again! Cancel reply