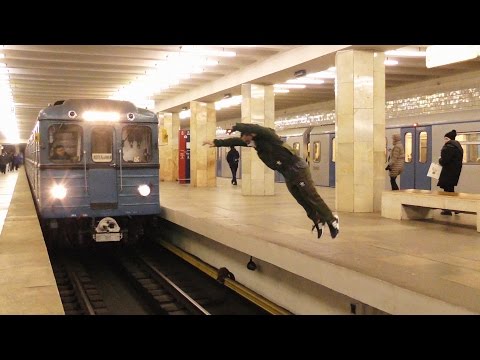 WB NEWS: This is the death-defying moment a daredevil appears to somersault across a subway line in Russia in front of an oncoming train that misses him by inches.

The identity of the daredevil stuntman who covered his face with a scarf and leaped across the tracks at a Moscow Metro station is not known.

The foolish extreme jump across from one platform to another was at Polezhaevskaya station on the Russian capital’s underground train system.

The driver of the approaching train beeps at the man.

But the stuntman – probably in his teens – is shown sitting on a station bench doing up his Adidas trainers before leaping in front of the train.

His timing leaves nothing to chance as the train comes into the station and he makes it to the second platform without being hit.

The jumper is then filmed boarding the same train as a passenger after narrowly avoid certain death.

The video has been viewed more than 75,000 times – yet some viewers question whether it was a real jump.

They suggest the driver’s face shows ‘no surprise’ as the man somersaults out in front of him.

They query whether the footage of the moving train and the jump were filmed separately and then spliced together.