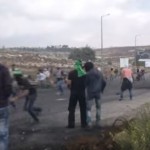 In a matter of seconds, the men wearing scarves over their faces and throwing stones along with a group of Palestinians pulled out their guns, opened fire and blew their cover.

“Mustarabiin!” [or mistaarvim in Hebrew] rang out among the crowd of about 100 Palestinians who had been hurling stones at Israeli soldiers for several hours at the Bet El checkpoint outside Ramallah. The term refers to Israeli soldiers dressed like Arabs to carry out military missions.

The incident on Wednesday, captured on video by an AFP journalist, offered a rare glimpse of what appeared to be Israeli troops embedded with a group of Palestinian stone-throwers.

The undercover agents on Wednesday grabbed and beat one man while opening fire as stones flew toward them. One of the agents also appeared to shoot the man in the thigh at point-blank range.