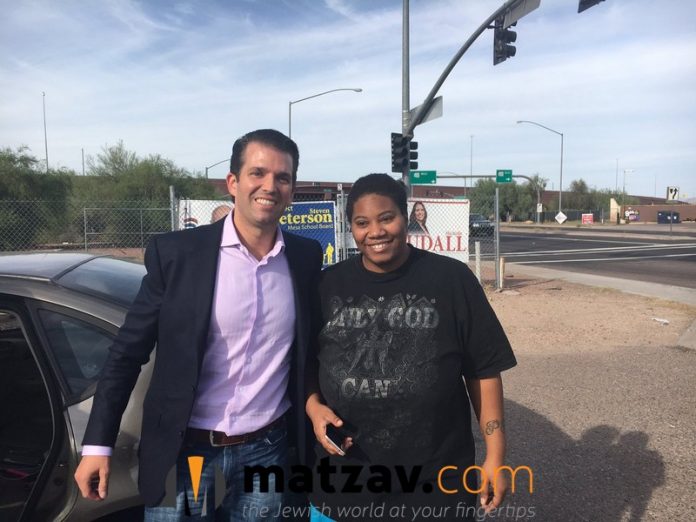 A story about Republican presidential nominee Donald Trump’s oldest son, Donald Trump Jr., is gaining a lot of positive attention despite the fact that it has absolutely nothing to do with the election. The younger Trump was in Arizona on Thursday driving between campaign events, when he and his companions came across a woman having car trouble. What happened next is what has people talking.

“We were on our way from a rally to another event and Donald Trump Jr. hopped out first to help push this lady’s car off the road, get some water and call for help,” Maricopa County Republican Party Chairman Tyler Bowyer, who was traveling with Trump Jr., posted on Facebook. “Needless to say, she was pretty surprised to find out it was Donald Trump Jr. pushing her car.”

Bowyer’s Facebook post has already been shared some 13,000 times, and his Twitter post has more than 5,000 re-tweets and 8,000 likes. In an interview with The Arizona Republic, Bowyer said the group gave the woman every water bottle they had so she wouldn’t get dehydrated while waiting for help (temperatures topped 100 degrees in the swing state on Thursday). He also said Trump Jr. never identified himself, but the woman realized who he was and asked for a picture.

“She was just stunned. She was taken aback,” Bowyer said. “She was like, ‘Man, I have to be able to tell people about this.’ So we made him get out and take a picture. And that was it.”

“This was a real act of service that he just naturally did,” he continued. “Politics was on the back end of it. The front end of this was being a good neighbor, being a good American. I was 101 degrees outside, for crying out loud.”

Check out Bowyer’s video of Trump Jr. below: