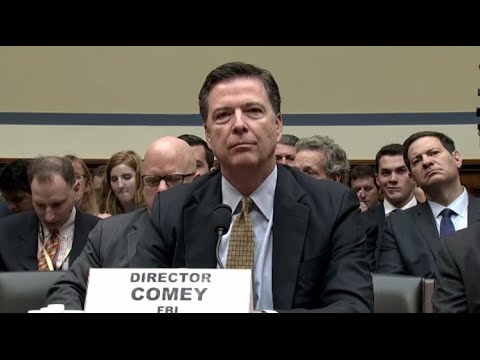 WASHINGTON – FBI Director James B. Comey said Thursday that it would have been virtually unprecedented to charge Hillary Clinton under a federal statute making it a felony to mishandle classified information through “gross negligence.”

The case, he said, would have been just the second in nearly a century.

“No reasonable prosecutor would bring the second case in 100 years based on gross negligence,” he said.

Comey was testifying Thursday morning before the House Oversight and Government Reform Committee, where he was grilled by legislators on how he concluded no charges should be brought in the investigation of Hillary Clinton’s use of a private email system while she was secretary of state. Of particular interest was how the FBI director reconciled his assessment that Clinton was “extremely careless” with his decision not to recommend charges.

“We’re mystified and confused by the fact pattern that you laid out and the conclusions that you reached,” House Oversight and Government Reform Committee Chairman Jason Chaffetz, R-Utah, told Comey. “It seems that there are two standards, and there’s no consequence for these types of activities and dealing in a careless way with classified information. It seems to a lot of us that the Average Joe, the average American, that if they had done what you laid out in your statement, that they’d be in handcuffs.”

Comey stood by his recommendation that Clinton not be charged. He said in the Clinton email investigation, as in all probes, agents were focused on the facts, the law, “and how have similar people – all people – been treated in the past.” They are keenly interested, he said, in “what did the person do, and when they did that thing, what were they thinking.”

“We don’t want to put people in jail unless you we prove that they knew they were doing something they shouldn’t do,” Comey said.

Comey noted, though, that a section of the Espionage Act allowed for prosecutions of those who through “gross negligence” let classified information “be removed from its proper place of custody or delivered to anyone in violation of his trust, or to be lost, stolen, abstracted, or destroyed.” And he said investigators examined that charge for Clinton and her staffers. But he said prosecutors had pursued only one case in nearly a century based on “gross negligence,” and took aim at his critics – some of them former prosecutors – who have said a case could have been made against Clinton

“I wonder where they were the last 40 years, because I’d like to see the cases they brought on gross negligence,” Comey said.

The much-anticipated appearance comes just a day after the Justice Department formally closed its probe involving the presumptive Democratic presidential nominee and two days after Comey announced his controversial recommendation. Republican legislators have been waging an aggressive campaign to solicit more information from Comey.

In a letter sent to Comey on Wednesday, Senate Judiciary Chairman Charles Grassley , R-Iowa, asked, “Given your statement that Secretary Clinton and her aides were ‘extremely careless’ in handling classified information, why do you believe it would be unreasonable for any prosecutor to bring a charge based on ‘grossly negligent’ handling of classified information? Is there a distinction between those two standards? Or do you believe that there should be an Executive Branch policy of refusing to prosecute anyone for gross negligence without evidence of intentional conduct, even though the statute does not require it?”

Comey has said previously that investigators looked at other cases involving classified information and could not find a parallel that would support charges in the Clinton matter. He specifically addressed the bureau’s investigation of former CIA director and general David Petraeus on Thursday, distinguishing it from the Clinton email probe in no uncertain terms. He said Petraeus – unlike Clinton – lied to the FBI, and investigators found classified material “hidden under the insulation in his attic.”

“Clearly intentional conduct,” Comey said of Petraeus, “Knew what he was doing was a violation of the law.”

Comey, though, did not spare Clinton from possible criticism altogether. While he confirmed Clinton did not lie to bureau investigators, he said he was “not qualified to answer” whether she had lied to the public.

Comey said investigators had found three documents with classification markings when they assessed her personal email system, which contradicts Clinton’s previous public assertions on the matter, though the State Department has said two might have been incorrectly marked. Pressed on whether FBI agents had assessed whether Clinton had also lied under oath on that point during congressional testimony, Comey said they would need a referral from Congress.

Comey also said if an FBI agent were found to have been careless with classified information, that could result in a loss of security clearance, suspension or even termination.

“It would be a very important consideration in a suitability determination,” Comey said.

Late last week, U.S. Attorney General Loretta Lynch announced she would accept the recommendation of career prosecutors and FBI agents to assuage questions about the investigation’s integrity, concerns that were intensified after Lynch met privately with former president Bill Clinton aboard her plane in Phoenix. Lynch and Clinton have asserted the meeting was a chance, social encounter at which no pending cases were discussed, and Lynch has said she planned to accept career employees’ recommendation even before it occurred.

Lynch herself is scheduled to appear before the House Judiciary Committee on Tuesday. On Wednesday, she announced that she was accepting the recommendation of Comey and others and closing the probe involving Clinton.

“Late this afternoon, I met with FBI Director James Comey and career prosecutors and agents who conducted the investigation of Secretary Hillary Clinton’s use of a personal email system during her time as Secretary of State,” Lynch said in a statement. “I received and accepted their unanimous recommendation that the thorough, year-long investigation be closed and that no charges be brought against any individuals within the scope of the investigation.”