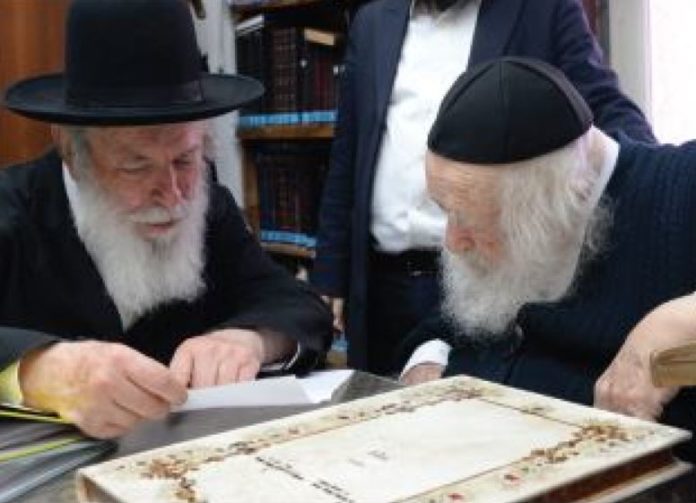 An intense meeting was held at the Bnei Brak home of HaRav HaGaon Rav Chaim Kanievsky recently on behalf of sick men, women, and children in Israel. Attending were Rav Yitzchok Zilberstein and Rav Shimon Baadani, who have also attached themselves to the cause, as well as various Kupat Ha’Ir representatives, gabbaim, and spectators. Discussed was the epidemic of cancer and other serious illnesses, and their resulting debts, as a rising threat to the survival of the Jewish People. As of now, cancer is the #1 cause of death in Israel, with many families suffering in dire poverty as they struggle to afford their expenses.

In a captivating video of the event, Rav Yitzchok Zilberstein calls out emphatically, gesturing toward Rav Kanievsky: “Whoever donates to those who are ill, there is a law in Heaven – measure for measure. You heal, and you will be healed – a law!”

When asked by Rav Shimon Baadani what those who donate to Kupat Ha’Ir fund to help klal yisroel’s sick will receive in return, Rav Kanievsky, in his typical fashion,  answers precisely: “He will not be sick.”

In video footage taken following the event, Rav Yitzchok Kolodetzky addresses the camera directly: “Maran, our teacher, has asked to publicize to Am Yisrael: Whoever will give, and help to save those who are ill, measure for measure he and his family will be saved from the decree of the dreaded disease. They will merit that they will not be harmed by this illness.”

He continues, alluding specifically to one of the most devastating and common health issues in the world today: “B’ezras Hashem, everyone will be healthy, and the verses “There shall not be a miscarriages or infertility in your land, I will fill the length of your days” and “I will remove all illness from you” shall be fulfilled.”

Donations received to Kupat Ha’Ir’s cholim fund will go toward impoverished families suffering the financial consequences of serious illness. All donors will be davened for by Rav Chaim Kanievsky every Erev Shabbos before candle lighting.

In today’s world, there is no individual whose life has not somehow been touched by illness. As the winter approaches, each family must assess what they can do to protect themselves. Nutrition, exercise, and check-ups are the staples. From the rabbanim, however, comes the suggestion for another kind of hishtadlus – that of helping those who are desperately in need, and, midah k’neged midah, receiving health in return.