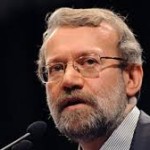 Knesset Speaker MK Yuli Edelstein on Monday paid a visit to the United Nations and made a speech at the UN plenum, but not everyone was interested in hearing what he had to say, Arutz Sheva reported.

The speaker of the Iranian parliament, Ali Larijani, was caught on camera as he got up and left when Edelstein was speaking:

Edelstein, who is at the UN for a global conference of speakers of parliament, on Friday met with UN Secretary-General Ban Ki-moon in the latter’s office.

During their meeting, Edelstein told Ban about Israel’s concern over the recent Iran nuclear agreement. “As a member of the Jewish people that experienced the Holocaust, I believe someone when he says he wants to destroy me,” said Edelstein. “No one has to love Israel. It is fine and necessary to express criticism, but you cannot threaten to destroy us.”