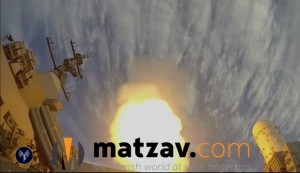 The Israel Navy and Israel Aerospace Industries carried out the first successful interception test of the next-generation Barak 8 missile system on Thursday, which is designed to protect naval ships and offshore gas rigs from hostile aircraft and missiles. In the test, the navy’s INS Lahav corvette launched a Barak 8 missile from its deck, striking a jet-powered, fast-moving drone.

The system is due to become officially operational in both the Israeli and Indian Navies within a year or two, said Brig.-Gen. Eli Sharvit, Israel’s Navy chief of staff. Boaz Levi, IAI corporate VP, said the Barak 8 radar can detect threats at over 100 km. and track multiple targets simultaneously.