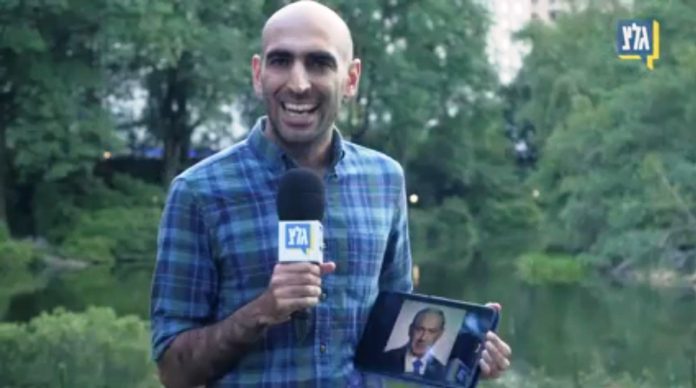 With many in the US in despair over their options in the upcoming presidential election, an Israeli radio personality decided to ask Americans their thoughts on a potential alternative.

Asaf Liberman, the host of the “Good Morning Israel” program on Army Radio, took a camera and microphone to New York City’s Central Park and presented passersby with a new candidate — Israeli Prime Minister Benjamin Netanyahu, who spent many of his childhood and young adult years in the US and speaks fluent English.

The responses Liberman received were mixed.

“I can’t see him as president here,” one man said. “He is great for Israel. He can stay in Israel and fight for Israel there.”

“I love him in Israel,” a woman echoed.

A second man said, “We support his policy in leading Israel, but I’m not so sure about America. It’s totally different.”

“You just want to get rid of him and get him over here,” another man chimed.

The next interviewee had the warmest praise for the prime minister, saying, “He’s a remarkable politician and a great statesman and a great leader and very intelligent man. And that’s why he could be a better president than anyone.”

The next two respondents were less enamored with the prospect of a Netanyahu presidency.

Another young man admitted to knowing nothing about Netanyahu, but promised he would vote for him “1,000 percent.”

The final interviewee took a cynical approach. “At the end of the day, all politicians, they lie,” he said. “Honestly, he’s like a late middle-aged white man, so he probably represents most of the country. So yeah, f*** it , he could be president.”

Watch footage of the interviews below: