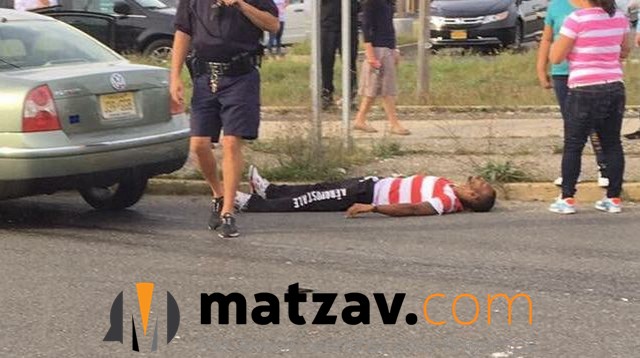 34-year-old Elijah Chandler of Jackson, NJ, has been charged with bias intimidation, making terroristic threats, assault, criminal mischief and harassment for his anti-Semitic tirade yesterday at the southwest corner of the intersection of East Kennedy Blvd. and Clifton Avenue, opposite the Glatt Bite parking lot, in Lakewood, NJ.

Chandler, wearing a red and white striped shirt and Aeropostale sweat pants, lost his mind after he claimed that a driver ran a red light and crashed into his vehicle. Chandler and a female with him began screaming continuously in a profanity-filled rant.

While Chandler claimed that the driver ran a red light, police have not released any information relating to the accident.

The woman could be heard yelling that “my daughter was in the car.”

“The [expletive] ran the light,” Chandler then shouted with his hands flailing. “He tried to beat the light, like all y’all [expletive].”

In a video that captured the incident, Chandler, who had been driving a turquoise-colored Volkswagon, can be seen bellowing and pointing at a man he claimed ran the light, shouting anti-Semitic remarks. Chandler then kicked the car that was operated by the driver. Witnesses said that Chandler opened the driver’s car door and pulled him from the vehicle. That part was not caught on video. He allegedly threatened to kill the man.

Chandler later collapsed on the ground. It wasn’t clear if it was staged or if there was a medically-related reason for this.

Because of the non-stop profanities, much of the video below had to be silenced, but Chandler can be heard telling the Orthodox Jews to “go back to your country.”