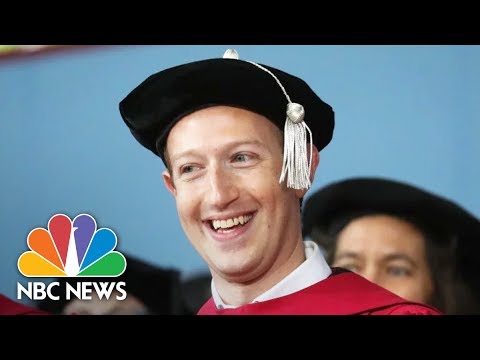 The billionaire’s main focus in his speech was purpose. He described how through his travels around the country, people have told him they’re trying to fill a void in their lives as jobs and community become less important in modern society. And that Zuckerberg foreshadowed how these problems could worsen as technology replaces jobs.

His first strategy for the world to find purpose is for people to make the hard choice to get started on big projects. For example, it might be tough to start fighting climate change, but we can put people to work installing solar panels, or we can start ending disease by getting people to contribute their health data and genomes.

His second strategy revolves around equal opportunity. He believes “it’s time for our generation to define a new social contract” where we measure progress by everyone having a role and a purpose. Zuckerberg suggested universal basic income, affordable childcare, flexible healthcare, prison reform, and continuous education as the ways to provide this equal opportunity.

Finally, he believes that we need to build community, both locally with our neighbors, and between nations to unite the globe. Read more at TECH CRUNCH.