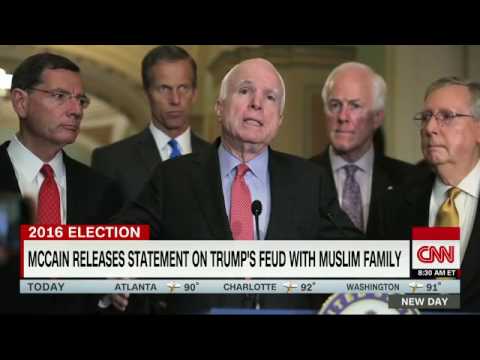 Donald Trump drew direct criticism from a leading Republican on Monday for upbraiding the Muslim American parents of an Army soldier killed in Iraq in 2004. But the GOP presidential nominee refused to back down from his attacks, and a former aide argued that the soldier would still be alive had Trump been president at the time.

The escalating tensions, coming at the start of the general election campaign, were the latest turns in a bitter exchange that is dominating the presidential race and has frayed Trump’s already delicate alliance with GOP leaders.

“In recent days, Donald Trump disparaged a fallen soldier’s parents,” said McCain, who was taken prisoner during the Vietnam War. “He has suggested that the likes of their son should not be allowed in the United States – to say nothing of entering its service. I cannot emphasize enough how deeply I disagree with Mr. Trump’s statement. I hope Americans understand that the remarks do not represent the views of our Republican Party, its officers, or candidates.”

McCain, who has tangled with Trump before, most notably after Trump said last year that McCain was not a war hero because he had been “captured,” added: “While our party has bestowed upon him the nomination, it is not accompanied by unfettered license to defame those who are the best among us.”

The admonishment went beyond the words of House Speaker Paul Ryan, R-Wis., and Senate Majority Leader Mitch McConnell, R-Ky. Over the weekend, they expressed support for the Khan family and reiterated their opposition to Trump’s proposed ban on most Muslims. But neither mentioned Trump by name and neither abandoned support for the nominee.

Khizr and Ghazala Khan participated in a round of television interviews on Monday morning in which they slammed Trump. Khizr Khan spoke at the Democratic National Convention last week, with his wife at his side. The couple’s son, Army Capt. Humayun Khan, was killed by a car bomber in 2004. He was 27.

“This candidate amazes me – his ignorance,” Khizr Khan said on NBC’s “Today.” “He can get up and malign the entire nation – the religions, the communities, the minorities, the judges. And yet, a private citizen in this political process, in his candidacy for the stewardship for this country – I cannot say what I feel? That proves the point: He has not read the Constitution of this country.”

Ghazala Khan, who teared up in one interview, rejected Trump’s suggestion in an interview with ABC News that she may not have been “allowed” to speak during her Democratic National Convention appearance.

“It doesn’t have to do anything with my religion,” she said on “Today.” She wrote in a Washington Post op-ed that she is still experiencing raw emotions about her son’s death and could not bring herself to speak at the convention.

Trump took to Twitter on Monday morning to lash out against Khizr Khan and the media. He argued that “radical Islamic terrorism,” not Khan, should be the focus of his exchange – just minutes after slamming Khan.

“Mr. Khan, who does not know me, viciously attacked me from the stage of the DNC and is now all over TV doing the same – Nice!” Trump said in his initial tweet.

On Saturday, Trump issued a statement saying, “While I feel deeply for the loss of his son, Mr. Khan who has never met me, has no right to stand in front of millions of people and claim I have never read the Constitution, (which is false) and say many other inaccurate things.”

Corey Lewandowski, Trump’s former campaign manager, defended his ex-boss on Monday and argued that the Khans’ son would still be alive if Trump had been president.

“Their son is a hero. And every person who has ever died fighting for our country and their families are heroes,” Lewandowski said on CNN, which employs him as a paid contributor. “The difference is, we’ve got 7,000 soldiers who died, $6 trillion wasted in wars overseas and, if Donald Trump was the president, we would never have had, and Captain Khan would be alive today.”

Trump regularly casts himself as an early critic of the Iraq War. The Post’s Fact Checker found that there is “no sign that Trump opposed the invasion or was vocal about it prior to the invasion.”

Lewandowski was fired by Trump in June.

Democratic nominee Hillary Clinton has vigorously defended the Khans. She tweeted a link to Ghazala Khan’s op-ed on Sunday night with the words: “Your courage is inspiring, Mrs. Khan – and you’re right.”

Family members of 17 service members killed in the line of duty wrote a letter to Trump calling his comments about the Khan family “repugnant” and demanding an apology. The letter was coordinated by Karen Meredith of the group VoteVets, which is aligned with Democratic candidates.

Late Sunday, Trump supporters, including longtime adviser Roger Stone, circulated unsubstantiated accusations from an anti-Islam website about Khizr Khan. Stone tweeted a link to a post that, among other things, accuses Khan of being a “Muslim Brotherhood agent who wants to advance sharia law.”

Both Khans forcefully denounced terrorism on Sunday, and Ghazala Khan said Trump is ignorant when it comes to understanding Muslims. “If he studied the real Islam and Koran, all the ideas he gets from terrorists would change, because terrorism is a different religion,” she wrote.