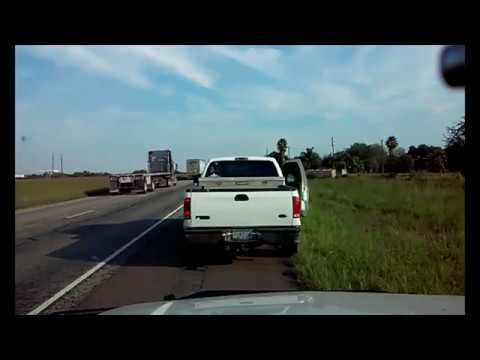 A group of migrants packed into a pickup truck ran away from authorities in a failed human #smuggling attempt. The incident occurred in Brooks County, Texas, approximately 70 miles north of the border with Mexico. Sheriff’s office deputies captured the chase and bail-out on a police dash cam video.

The failed smuggling attempt took place near the town of Encino, Texas, when a Brooks County Sheriff’s Office deputy attempted to pull over a white Ford pickup. A records check on the vehicle’s license plates revealed that the truck had been reported stolen, the sheriff’s office reported.

The police dash cam video revealed that shortly after stopping, the driver of the pickup drives away at a high rate of speed along U.S. Highway 281. The fleeing truck loaded with migrants then crosses into oncoming traffic and then drives off the road. After stopping, more than 20 migrants can be seen jumping out of the vehicle and trying to run away from law enforcement. It remains unclear how many of the group members were apprehended.

As Breitbart News has reported, Brooks County is not a border area but has been forced to deal with the same issues as cartel-connected human smugglers and drug traffickers rush through the area on their way north. The smugglers move along U.S. Highway 281 but have to get either sneak through or march the migrants around a U.S. Border Patrol checkpoint located just south of the town of Falfurrias.

Human smugglers often force migrants to trek for days across the harsh terrain in an attempt to avoid law enforcement. The journey has often proved deadly to hundreds of migrants lost their lives in their attempt to get around the checkpoint. In 2018, authorities found the remains of 50 migrants throughout the ranches of Brooks County.