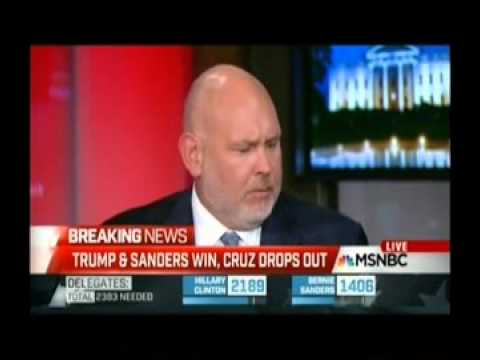 STEVE SCHMIDT: A lot of commentators say — they scratch their chins — they say, my God, the tone of this election. Have they not listened to talk radio for five minutes in this country that reaches 50 million people a day for a moment in the last ten years? The tone is disgusting around our political discourse and Trump has been a reflection of that tone in this steel cage match Republican primary. You look at the intellectual collapse of the conservative movement, the fading of giants like William F. Buckley, the replacements of purveyors of blogs and polemics that — and it’s all collapsed.

CHRIS MATTHEWS (HOST): Who won when Trump won? Did Mark Levine win? Did Michael Savage? He’s still on the air. Who are these people?

SCHMIDT: Mark Levine is decrying this tonight. He’s series-A round investor in the demise of the conservative movement in the Republican Party. He, very famously, a woman calls up his show and has the gall to just disagree with Mark Levine, who calls himself the great one. Talk about narcissist, talk about self-aggrandizers. Mark Levine asked do you have a gun in the house, go find it and blow your brains out. This is the tone that has emanated from talk radio and this cancer has spread and that tone has infected the whole of the party. And so this moment that we’ve arrived at, where there’s been a serverability now between issues and conservatism, and the test of who is the conservative in the race is who has the loudest voice of opposition.