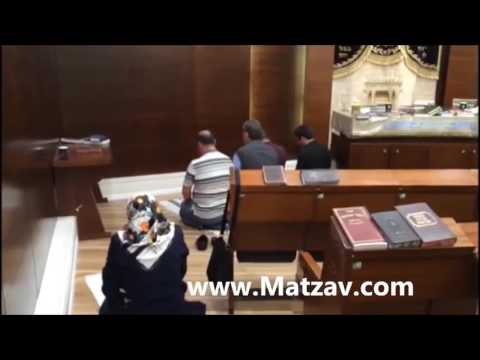 On Sunday, five Muslims traveling from Turkey to Israel were looking for a place to pray, so they entered the shul at Ben Gurion Airport in Tel Aviv and prostrated themselves towards Mecca, spreading out talleisim to kneel upon in place of their traditional Muslim prayer rugs.

Some people reacted angrily to the incident, seeing it as the desecration of a sacred Jewish place and tashmishei kedushah.

The shul was empty at the time the Muslims – four men and one woman, wearing a shawl – entered because it was the eve of the Yom Tov of Simchas Torah in Eretz Yisroel, with Hoshanah Rabbah having ended shortly before.

The Muslims all removed their shoes and then carried out their prayers just feet from the aron kodesh.

The prayer was caught on camera by a passerby. At the end of the video clip, seen below, the woman seems to sense that someone was watching them and she turns around.

Ben Gurion Airport is not home to a mosque, so the family entered the shul – perhaps thinking it is an interfaith chapel – for one of their five Muslim daily prayers.

After a passing Jew told the Muslims that their actions were in error, they picked themselves up, allegedly apologized, and left the premises.

The incident has sparked lively discussion across the Web, with some expressing anger, while others are expressing satisfaction that Jews were able to help others.