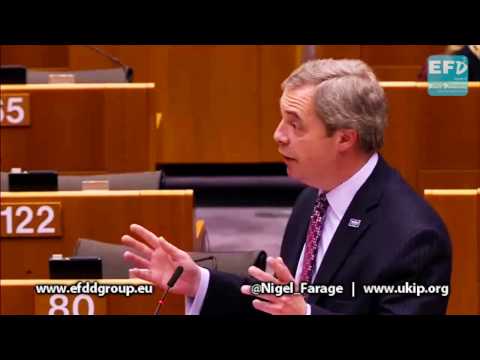 This is a must watch. Nigel Farage addressed the EU, of which he’s a representative. He rips them a new one. Americans have a friend in Nigel. Transcript below.

Thank you, well I can see that you’re all very upset here this afternoon and I have no doubt that the events in the USA over the last few weeks have been a very profound shock to you. Perhaps you’re right, you see what has happened here is somebody has stood on a manifesto for election, got into office and within one week said that he will hold faith with his own electorate.

It is called genuine democracy. Unlike the system we have in the European Union where the unelected commissioners like Mogherini here, have the sole right to propose legislation. So I’m sure that it’s a great shock to you to see that a genuinely elected democrat is doing what he was put in to do. And it must be, I would think today in Washington….

And out of institutional respect for the truth Mr President, I’m sure you will understand and agree with me that within the European Union form of law making it is the unelected Commission that have the sole right to propose legislation. If I’m wrong in saying that you can throw me out of this parliament, right here, right now, this afternoon.

Oh I’ll be respectful alright, but perhaps you will be too for the right of the leader of a political party that won the European elections in the United Kingdom in 2014. It seems to me that actually with all the anti-Trump rhetoric that is coming from everywhere, actually what we’re hearing is the true nature of the European project, which is genuine anti-Americanism.

Trump is motivated by protecting the United States of America from Islamic terrorism, whereas what has happened in this room and governments around Europe is you have welcomed this people into your own homes. But can we please just for a moment look at the facts, amongst all the hyperbole and the hysteria, all that Donald Trump has done is taken seven countries that were identified by President Obama as posing a risk to the USA. Obama had already put in place extreme vetting, what Trump has done is for 90 days to say let’s examine that vetting and see whether it’s good enough.

But I want to ask you Mr Verhofstadt and all the others, with your faux outrage today, where were you when Obama, in 2011, banned any Iraqi from going into the country for six months? Why do I hear no criticism in this chamber or from the Commission of Saudi Arabia, Kuwait, Bahrain and others who have refused to take a single, not one, refugee or displaced person from Syria?

And how can it be that on Holocaust day, last friday, not a single one of you criticised the sixteen countries in the world that ban Israeli Jews from even going to their country on holiday? What is this hypocrisy?

So perhaps what we need to do Mr President, and through you to the members, perhaps what we need to do is be a little bit more constructive. All of us here say we’re democrats, well here’s a chance to prove it. Let us invite President Trump to come here, to this European Parliament. I’m sure as democrats you’d all agree that what we need to do is to have an open dialogue with the newly elected, most powerful man in the world and if you throw that rejection back in my face then you prove yourselves to be the anti-democratic zealots that I always thought you were. 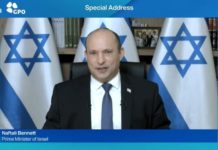 Bennett To World Economic Forum: Iran An ‘Octopus Of Terror And Instability’