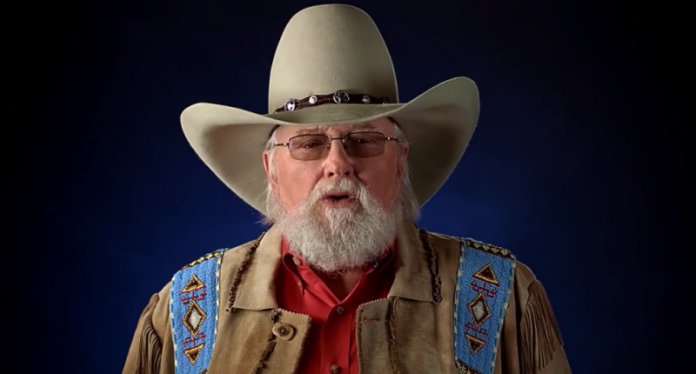 As part of a new campaign promoting its agenda, the National Rifle Association published videos featuring people who like guns making statements against the liberal elites, celebrities and feckless political class that would supposedly pry their weapons away from them.

Another, though, is directed at a different target: Iran.

It’s a particularly spectacular entry featuring a gray-bearded man in a wide-brimmed hat telling the “ayatollahs of Iran” to “listen up.” Here’s the opening conceit: “You might have met our fresh-faced flower child president and his weak-kneed, Ivy League friends. But you haven’t met America.”

The narrator is Charlie Daniels, a popular country musician who sure is good at spinning some folksy yarns. He goes on to tell Iran what “America” really is:

“You haven’t met the heartland, or the people who will defend this nation with their bloody, calloused, bare hands, if that’s what it takes. You haven’t met the steelworkers and the hard-rock miners, or the swamp folks in Cajun country who can wrestle a full-grown gator out of the water.

“You haven’t met the farmers, the cowboys, the loggers and the truck drivers. You don’t know the mountain men who live off the land, or the brave cops who fight the good fight in the urban war zones.”

As a matter of fact, the cabinet of Iranian President Hassan Rouhani includes officials who studied in universities in Colorado and Louisiana, not far from mountain men and swamp people who may choose to chase after full-grown gators.

But of course, that’s not really the point. The video is great nationalist agit-prop, conjuring myths of authenticity that play right to the heart of the NRA’s narrative of a primordial America with its hard-working frontiersmen and vigilant militia.

“No, you’ve never met America. And you oughta pray you never do,” Daniels concludes, before pronouncing the tagline: “I’m the National Rifle Association of America, and I’m Freedom’s Safest Place.”

Iran, though, is home to plenty of propaganda of its own. The image of America that the Islamic Republic likes to peddle has nothing to do with the two evoked by Daniels – that of flower-child Obama and his weak friends or that of the cowboys and rock-mining volk.

Rather, it has a lot more to do with a century of imperial meddling, an epochal CIA-engineered coup, the death of hundreds of Iranian civilians at the hands of a U.S. warship and the country’s perceived encirclement by the world’s most powerful military.

Those gator-wrestlers with calloused hands sound tough, but Iran’s spin-doctors don’t need more reasons to stoke the flames against the Great Satan.