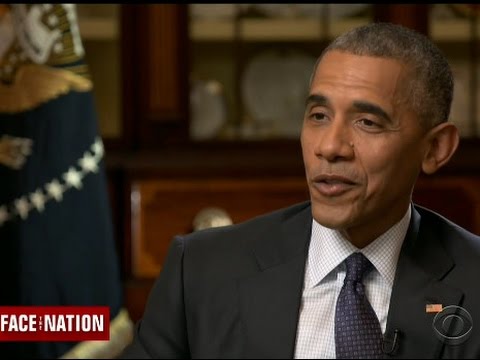 In a taped interview with CBS’ John Dickerson that aired Sunday on “Face the Nation,” Obama said that fact “says something about what’s happened to the Republican Party over the course of the last eight, 10, 15 years.”

He went on to say that past Republican leaders such as Bob Dole, Jim Baker, Howard Baker, Dick Lugar and Colin Powell were conservatives who “also understood that our system of government requires compromise, that Democrats weren’t the enemy, that the way our government works requires us to listen to each other.

“And that’s not the kind of politics that we’ve seen practiced,” Obama said.

Obama also reiterated what he said in a news conference on Friday: that he doesn’t think the dark picture of America that Trump painted in his nomination speech is true, even in the wake of an attack on a Munich mall later that day that killed at least nine people.

“I think right now we’ve gone through a really tough month, and that happens sometimes,” Obama said, going on to say that crime rates are lower than when he took office, that immigration rates are lower than when Ronald Reagan was president and that, yes, there are some “serious” terrorist attacks but “the fact of the matter is the American people are significantly more safe now than they were before all the work we’ve done since 9/11.”

Sticking with that theme, Obama told Dickerson that in a lot of ways he’s more “hopeful” about the opportunities for people of color in the United States, citing his daughter’s easy relationships with white friends as an example.

“They have a common culture and a common language and common perspectives that were far more segregated even when I was growing up,” Obama said.

The advent of smartphones to capture police shootings of black men in places such as Minnesota and Louisiana has highlighted racial tensions that are not new, he said.

Obama again defended presumptive Democratic nominee Hillary Clinton’s use of a private email server, which the FBI has said was “extremely careless.”

“She would acknowledge she made a mistake,” Obama told Dickerson. “But what I also think is true is if you’ve been in the public eye for decades, at the highest level of scrutiny, folks are going to find some mistakes you’ve made.”

He said he understands better than most Clinton’s strengths and weaknesses: “She’s not flashy. There are better speech-makers,” he said. ” … But she knows her stuff, and more than anything, that is what is ultimately required to do a good job in this office.”