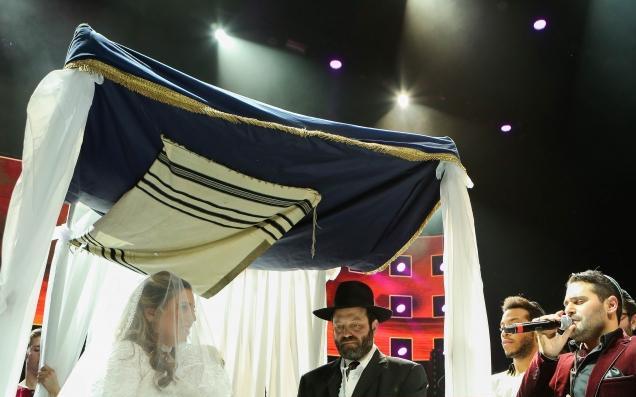 Participants of a recent music performance in Brooklyn experienced a unifying and electrifying evening that left them with an uplifting and empowering feeling about “The Power of Jewish Unity,” as Sunday’s event was billed.

While the stage boasted a lineup of Jewish music stars Gad Elbaz and Dudu Fisher, the concert ended up being an emotional journey through the miraculous growth of world Jewry since the Nazi Holocaust.

The sold out crowd of 3,000 at the majestic Kings Theater in Flatbush, Brooklyn was comprised of Jews of all ages and backgrounds.

If music has the ability to excite, imagine an evening packed with duets, cherished tunes, memorial tributes, moving images and to top it off – an actual wedding of a chosson and kallah who are children of Holocaust survivors.

“We wanted people to feel inspired and uplifted by the show. The message was, Judaism does not equal tragedy and death, but rather continuity and life,” says Daniel Finkelman, who produced and directed the show along with executive producers Cecelia Margules and Lev Rivkin. Co-producers were Shlomi Cohen, Victoria Zirkiev and Zvika Bornstein.

Gad Elbaz’s voice accompanied the transformation of the stage into a setting of a wedding ceremony. It came as a complete surprise to many in the crowd when a white chuppah canopy was placed center stage.

The chosson Pesach Charni and kallah Avigail Chazin, descendants of Holocaust survivors, agreed to share their special day and the joy of their wedding with the thousands in attendance, highlighting Jewish survival and continuity.

While getting married on stage is not what Avigail and Pesach had planned, when they heard that the show’s producers wanted to have a wedding during the show, “It just all came together,” the kallah said.

“Our people had so many tragedies and we shed so many tears, that when we have a joyous occasion you want to share it with everybody, and you want to make it loud and invite as many people as possible,” she said.

People in the audience turned their heads to see a kallah walking down the concert hall aisle to join the chosson as Gad Elbaz sang “Boi Kallah.” The wedding was officiated by Rabbi Aryeh Katzin, Executive Director of the Russian American Jewish Experience.

Video: The story of Pesach and Avigail

Video: The Chuppah of Pesach and Avigail: