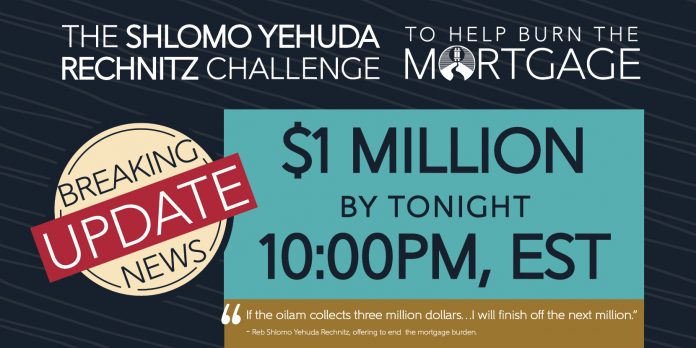 They’re going for it! That’s right, as we speak there are scores of volunteers at Darchei Torah making phone calls, telling their friends and getting the word out.

As of THIS MOMENT they have already raised $672,000. Can we make it to THE IMMEDIATE GOAL OF $1 Million by TONIGHT 10pm EST?

At last night’s dinner of Yeshiva Darchei Torah at The Aviator in Brooklyn, NY, Reb Shlomo Yehuda Rechnitz, legendary baal tzedakah from Los Angeles, stepped up to the plate once again in his hachzokas Torah efforts.

The dinner paid tribute to Rav Yaakov Bender, rosh hayeshiva of Yeshiva Darchei Torah of Far Rockaway and one of the chinuch legends of our time, in whose honor thousands turned out.

The dinner brought together admirers and supporters of Darchei Torah, who wished to generously contribute to the yeshiva so that Rav Bender and his staff can continue educating and inspiring youth as they have been for years.

A goal of raising $4 million was announced. During his remarks, Reb Shlomo Yehuda, who is renowned for his unparalleled philanthropy and generosity, declared that if supporters of the yeshiva will raise $3 million by this Wednesday evening, the night of his daughter’s wedding, he will contribute the last million dollars.

A gasp could be heard throughout the crowd, who then broke out in spontaneous applause in appreciation of Reb Shlomo Yehuda’s willingness to open his heart in support of this most outstanding Torah institution.

Now, the onus is on Yidden from New York and beyond to come together and raise the $3 million to close the mortgage gap that Rabbi Bender shoulders, so that Reb Shlomo Yehuda will follow through on his pledge of $1 million.

The Challenge from Yeshiva Darchei Torah on Vimeo.