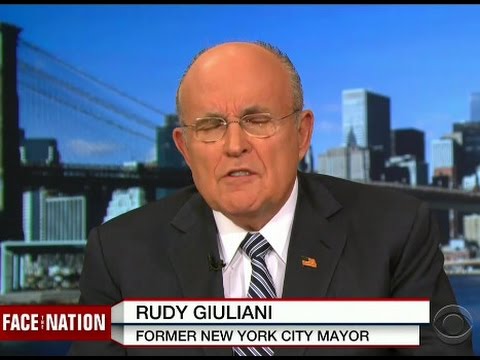 The former New York City mayor is his usually eloquent self in addressing the recent brouhaha following the Texas shooting on CBS’ Face the Nation yesterday.

The former mayor said on Sunday that black Americans must teach their children to respect law enforcement, and that “real danger” to them is violence within the black community itself.

“If I were a black father, and I was concerned with the safety of my child, really concerned about it and not in a politically activist sense, I would say, be very respectful of the police,” Giuliani said during an appearance on CBS’s “Face the Nation.” “Most of them are good. Some can be very bad. And just be very careful.”

Giuliani’s comments came in the wake of the killings of police officers in Dallas, as well as incidents in Minnesota and Louisiana, in which black men were fatally shot by police, sparking national outrage. Authorities on Saturday arrested more than 200 people as unrest continued following the recent shootings. Among them was DeRay Mckesson, a well-known activist in the Black Lives Matter movement. He was released Sunday afternoon.

There were 990 people fatally shot by police in 2015, according to a Washington Post database, and in 2016, there have been more than 500 fatal police shootings, the database shows.

In his “Face the Nation” appearance Sunday, Giuliani said: “The reality is, we have to look differently at race in America, if we’re going to change this.”

“So maybe whites have to look at it differently and blacks have to look at it differently. Whites have to realize that African-American men have a fear, and boys, have a fear of being confronted by the police because of some of these incidents,” Giuliani said. “Some people may consider it rational. Some people may consider it irrational. But it’s a reality. It – it exists.

Giuliani made similar claims in 2014, stating on NBC’s “Meet the Press” that “Ninety-three percent of blacks in America are killed by other blacks.” However, a Washington Post fact-check found that the statistic he used lacked significant context, and determined that his simplification of the issue was misleading.

The statements echoed previous comments Giuliani made on MSNBC, which were also met with criticism.