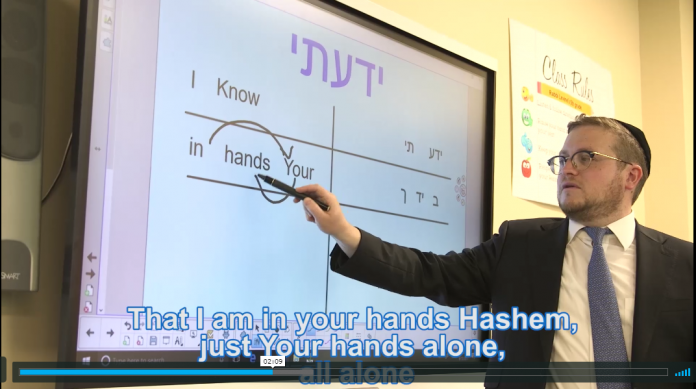 We, as a collective Torah community, are blessed with a rich repertoire of niggunim to listen to and enjoy. But how many of us have taken the time to understand and ponder the words of the beautiful songs we sing? And how much more meaningful would our musical experiences be if we gave a moment of thought to the words of the melodies that fill our lives?

R Baruch Levine, a mechanech himself, saw a need and approached Torah Umesorah with a novel idea and together developed a concept in which boys and girls of all ages, and their parents and grandparents, can appreciate and internalize the niggunim we hear all the time.

Torah Umesorah, forever at the forefront of inspiring and educating, immediately took to the idea and launched a project called “Know Your Niggun,” which, through translation and visualization of the niggun’s words, will turn mere lip service into a heart-and-soul experience, allowing you to absorb a song’s message like never before.

The first song selected for this project is Yodati, composed by Pinchos Breier and first recorded by Avraham Fried. Interestingly, the song was a gift from the composer to his son and daughter-in-law, Yehuda Leib and Esther, upon their marriage. The words are a beautiful prayer written by Rav Mayer’l of Apt zt”l, stating, “No matter how much time and effort I invest in whatever I am doing, without help from Hashem, there’s no chance for any success.”

The song in this magnificent video was performed by child soloist Ari Ettinger and Rabbi Baruch Levine. It features his talmidim at the Yeshiva K’tana of Waterbury. The english lyrics we’re written by Mrs Ruchie Torgow, the audio was produced by Yochi Briskman and the video was produced by Chananya Kramer and his team at Kol Rom Media.

Watch and be inspired: