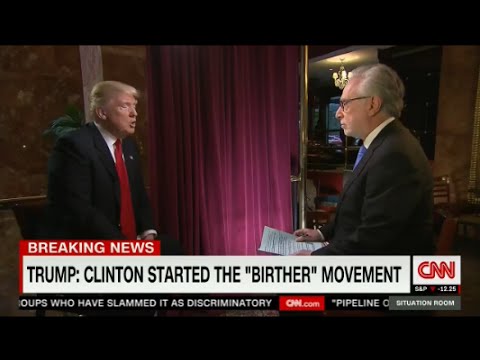 The real estate mogul was responding to video footage of Clinton blasting Trump for questioning where the president was born and demanding that he release his birth certificate.

“The leading Republican contender is the man who led the insidious birther movement to discredit the president’s citizenship,” Clinton said during a campaign event Sunday.

Trump dismissed those claims, repeating an oft-cited – but debunked – suggestion that Clinton herself was the first to question Obama’s birthplace. Several independent fact-checkers investigated the claims and concluded that they were unfounded. FactCheck.org wrote last year that, “[w]hile it’s true that some of her ardent supporters pushed the theory, there is no evidence that Clinton or her campaign had anything to do with it.”

Pressed on where he stood with regards to the president’s birthplace today, Trump said that he’s not interested in discussing the issue further.