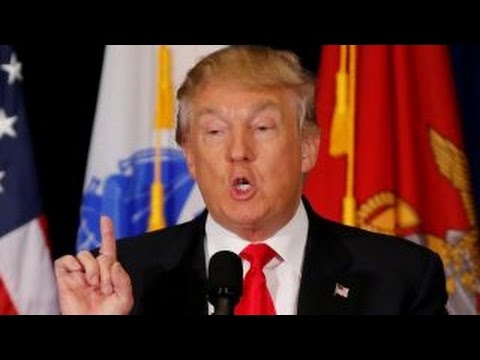 Virginia – Donald Trump pitched himself as the “law and order candidate” Monday and castigated Hillary Clinton as both dishonest and ineffectual in a speech that came on the heels of a week with repeated instances of deadly violence involving police and civilians.

“I am the law and order candidate,” Trump said before pausing for effect. “Hillary Clinton, on the other hand, is weak, ineffective, pandering.”

Trump argued that Clinton’s use of a private email server and the subsequent criminal investigation about it proved that she is “either a liar or grossly incompetent.”

He added: “Personally, it’s probably both.”

The speech was initially framed as a policy address about veterans’ issues. But it also focused on the criminal justice system. Trump said it was reworked in light of the deadly attack against police officers in Dallas last week. In his opening remarks, Trump thanked police around the country for working “thanklessly and under relentless criticism.”

Coming a week before the Republican National Convention kicks off in Cleveland, the speech was an attempt by Trump to project seriousness heading into the gathering. Since effectively clinching the GOP nomination in the spring, Trump has struggled to stick to attacking Clinton, often diverting to personal feuds with many people, including fellow Republicans.

Many of the veterans’ reforms Trump discussed Monday were not new. But he used them to try to draw a fresh contrast with Clinton.

He presented himself as a caring alternative and promised to “clean out the corruption in government” through accountability reforms, particularly in the Department of Veterans Affairs.

The FBI last week capped an investigation into Clinton’s email server. While the agency strongly condemned her email practices, it decided that her actions did not merit charges.

Trump delivered his speech in an area with a large active military and veteran population. Nearby Naval Station Norfolk is the world’s largest naval base.

While Trump has sought to cast himself as a staunch defender of veterans, he has also come under scrutiny over his delay in donating to veterans’ causes. The Washington Post reported in May that Trump fulfilled a pledge of $1 million months after promising the funds and after Trump’s then-campaign manager falsely said that he had already donated the money.

The presumptive GOP nominee spoke Monday in a hotel ballroom to an intimate crowd – a departure from the large, open rallies with thousands of people that have become his calling card.

Virginia is seen as a key battleground in the presidential election. Clinton is campaigning in the commonwealth Thursday.

“Make no mistake about what Donald Trump just laid out,” responded Clinton deputy foreign policy adviser Bishop Garrison in a statement. “The policy reforms he proposed would put us irreversibly on a path toward the wholesale privatization of the VA. We can and must fix the VA to ensure that it provides top-of-the-line 21st century care for our veterans, and Hillary Clinton has laid out a plan to do exactly that.”

New Jersey Gov. Chris Christie introduced Trump on Monday, calling for “a return to law and order” and applauding Trump’s tough tone on national security. Christie has emerged as a staunch ally to Trump and is a potential vice presidential running mate.

Trump’s campaign also announced Monday that he was adding two new staffers to his communications team, which has undergone significant changes in recent weeks.

The campaign said that Steven Cheung will serve as the campaign’s director of rapid response, focusing on breaking news “and pushing back on false or unbalanced reporting.” Cheung most recently served as the communications director for Ultimate Fighting Championship.

Outside the venue, people sold Trump buttons and waved a Trump sign. A few dozen protesters held up a signs rebutting the mogul. One said “This Vet Supports Love Not Trump.” Another said “Virginia is for Lovers of Vets Not Trump.”

At one point, several of the protesters went up to police officers positioned nearby to shake their hands and thank the for their service.

John Zanelli, a retired Army lieutenant colonel who supports Trump and showed up outside Monday’s event to buy some buttons, said he is very troubled by Clinton’s use of a private email server and what it says about the kind of commander-in-chef she would be.

“She definitely needed to be fined or reprimanded,” said Zanelli, 67, of Virginia Beach.

But Zanelli said that while Trump is good at getting supporters “riled,” he still has work to do when comes to articulating differences with Clinton and prosecuting the case against her.