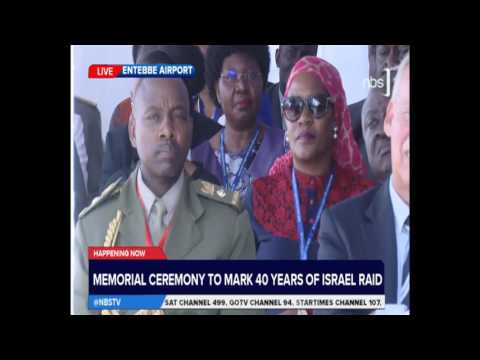 The managing editor of the Jerusalem Post was among figures in the Twittersphere who pointed out the peculiar nature of the address delivered on Monday by Ugandan President Yoweri Kaguta Museveni to a host of dignitaries as part of a ceremony marking the 40th anniversary of the Entebbe Raid.

Mideast analyst and Israel-based international human rights lawyer Arsen Ostrovsky gave a more detailed, bemused description of Museveni’s oration from the podium of the old Entebbe airfield, where, in 1976, Israelis and Jews held hostage by Palestinian and German terrorists with the assistance of then Ugandan dictator Idi Amin were rescued by a team of Israeli commandos.

Some of the ‘highlights’ from Ugandan President’s Yoweri Kaguta Museveni speech at the Entebbe commemoration (before Netanyahu & entire Israeli delegation).

* “Herod was a bad gentleman or something like that.”
* “Hitler was a hoodlum.”
* “Can someone remind me please name of the last Iranian President? Oh yes, Ahmadinejad.”
* “There was a character called ‘Balfour’, he put out something called Balfour Declaration or somethig like that.”

Oh, and he was repeatedly referring to Israel as ‘Palestine’.

The above posts were all referring to the event – full of pomp and circumstance – that kicked off Israeli Prime Minister Benjamin Netanyahu’s five-day trip to Africa to strengthen ties with the continent. The anniversary of the Entebbe Raid, officially called Operation Thunderbold, had special meaning for the Israeli leader, as it was his older brother, Yonatan, who led the heroic hostage-rescue mission in which he was killed.

Followers of the posts ridiculed the Ugandan president for his historical bloopers. Among these was a reference to the Balfour Declaration — stating that a national home for the Jewish people should be established in Palestine. Confusing this with certain suggestions at the time that a Jewish state be established in Uganda, Museveni said, “Fortunately, the Jews did not accept Balfour’s idea – which was a good thing, otherwise we would have been fighting you now.” Museveni, wearing a beige hat tied under his chin, chuckled at the last part of his sentence, indicating it was said in humor. The audience, including Netanyahu, also laughed, but visibly uncomfortably, as a result of Museveni’s error.

One comment on Ostrovsky’s post, from Sussex Friends of Israel, read: “Just watched [Museveni’s speech], had he taken a drop too much Shabbas wine??”

Beyond the rambling, Museveni, who has been in office since 1986, also denounced terrorism and said to Netanyahu, “Your brother Jonathan, some Israeli hostages, and some Ugandan soldiers were killed here, on that night, fourth of July 1976. Fortunately, the rescue mission succeeded and the innocent civilians were rescued.”

He also lauded Israel for its technological expertise and thanked the Jewish state (while calling it Palestine) for the many Israelis who have been helping the African continent in various ways.

“The logical solution is that there must be two states – one Arab, and one Jewish,” he said, adding that he would be able to broker such an arrangement “in a very short time,” if called upon to do so.