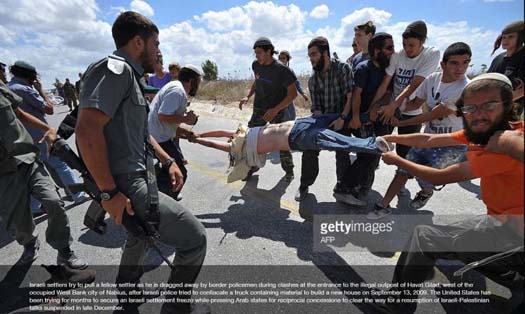 Falsified photos used in the Palestinian Authority report submitted to the World Health Organization ahead of its anti-Israel resolution last week “highlight the submission’s total lack of credibility,” a US-based watchdog blogged on Sunday.

According to “Snapshots,” the blog of the Committee for Accuracy in Middle East Reporting in America (CAMERA), in preparation for WHO’s publication of the decision, the PA Ministry of Health provided faux pictorial “evidence” of Israeli health violations against Palestinians.

For example, CAMERA cited, a photo “meant to illustrate ‘Settlers attacking a Palestinian child while being observed by Israeli occupation forces’ — as noted by blogger Israellycool two years ago when this picture first started to appear on social media — is a Getty Images picture showing the eviction of Israeli settlers. The scene does not at all involve Palestinians.”

Another picture — with the caption: “Photograph taken during the Israeli war on Gaza, 2014” – is actually a Photoshop makeover, exposed as a hoax by Israellycool at the time, of a photo published on a blog discussing how Israel might attack Iran’s nuclear reactors. According to CAMERA, “Editors of the ‘Gaza’ version erased the mountains and the building which simply don’t exist in Gaza.”

Two more pictures ostensibly about Operation Protective Edge submitted by the PA Health Ministry and highlighted by CAMERA were 1) a photo taken from Lebanon, and 2) a photo from Gaza, but from 2012.

Two photos purposely mis-attributed to Operation Protective Edge. The first was taken in Lebanon, the second in Gaza in 2012.

The Palestinian “girl killed in cold blood” is Yasmin Tamimi. Tamimi is not, apparently, a “girl,” nor is it even clear that she is dead. The Palestinian Center for Human Rights identifies her as 20 years old and does not claim that she was killed. And B’Tselem does not include her in its list of Palestinian casualties. According to Israeli reports, after her engagement to be married was called off, Tamimi attempted to stab an Israeli policeman, and Israeli forces fired on her, seriously wounding her. She survived, and was transported to Shaarei Tzedek hospital.

While searches did not reveal the source for the picture on the left, the image does date back as far as 2009.

The Palestinian “girl killed in cold blood” is Yasmin Tamimi. Tamimi is not, apparently, a “girl,” nor is it even clear that she is dead.

As The Algemeiner reported on Thursday, the WHO resolution – co-sponsored by the Arab Group and the Palestinian delegation to the UN — accused Israel of violating the “mental, physical and environmental health” of the Palestinians. The motion, which received support from France, Germany, the UK and various other EU states, was passed during WHO’s annual assembly on Wednesday. The US and Canadian delegations both voiced their strong objections to the resolution.

According to the Geneva-based watchdog group UN Watch, no resolutions were passed against any other country. The assembly did not address other major health crises, such as the bombing of hospitals in Syria by pro-regime and Russian warplanes, or the Saudi-led bombing and blockade in Yemen, which is denying millions access to food and water.