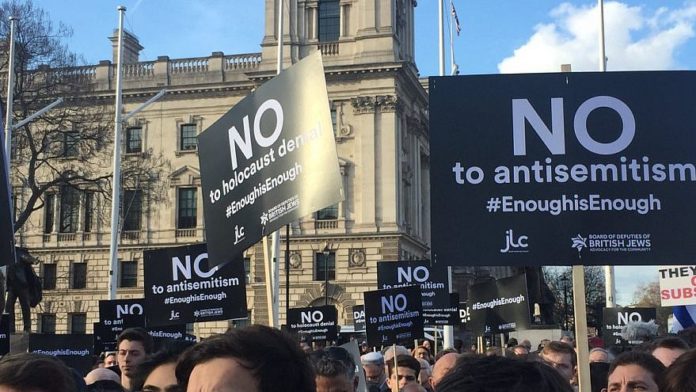 During the first six months of 2019, the highest number of anti-Semitic incidents to date were recorded in the United Kingdom in comparison to the same period in previous years, according to a new report published on Thursday by the Community Security Trust (CST).

The CST recorded 892 anti-Jewish incidents between January and June 2019—a rise of 10 percent from the first six months of 2018—with social-media attacks accounting for 384 of the incidents.

The total number included 710 abusive acts, such as verbal abuse and anti-Semitic graffiti, and 85 incidents classified as “assaults,” an increase of 37 percent of the same type of incidents recorded in the first half of 2018.

CST reported that almost two-thirds of the 892 anti-Semitic incidents were recorded in Greater London and Greater Manchester, the two largest Jewish communities in the United Kingdom.

Of the rise in anti-Semitic incidents, CST’s chief executive David Delew said “the problem is spreading across the country and online. It reflects deepening divisions in our society, and it is causing increasing anxiety in the Jewish community. It will take people of all communities and backgrounds standing together to turn this tide of hate around.”