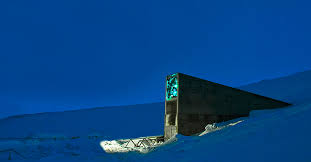 Unseasonably warm temperatures last fall caused water to breach the entrance to the Arctic’s so-called “Doomsday” seed vault, one of humanity’s last hopes after a global catastrophe, the company that manages the vault said last week.

The Global Seed Vault is beneath the icy permafrost of Svalbard, midway between Norway and the North Pole. Carved into the side of a mountain, the vault holds more than 500 million seeds from around the globe that could be used to recreate food supplies.

The seeds were unharmed by the water breach. Hege Njaa Aschim, a spokeswoman for the management company, Statsbygg, said water seeped only about 15 meters in to part of an access tunnel during the “very unusual warm and rainy October.” Read more at CNN.