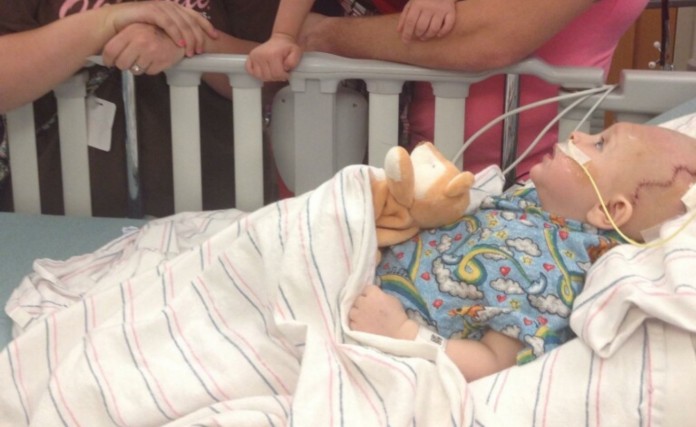 her shirt was embellished with her new son’s name and his expected birth date: “Bentley. Due 10/31/15.”

Yoder and her husband, Dustin Yoder, hopped into the car and headed for the hospital – but without any bottles, without any diapers, without a car seat in which to bring their newborn home.

They had packed one onesie – light blue with stars -and matching pants and warm, fuzzy socks.

The couple expected to bury their son in it very soon.

Dustin and Sierra Yoder, from Sugarcreek, a small town in Ohio, knew that Bentley had a rare condition in which his brain was growing outside of his skull. Sierra Yoder said doctors told them that their son would not live long past his birth. If he didn’t die, she said doctors warned, he would live with no cognitive function.

Now, here they were, only hours from the delivery. They planned to meet their son. Then say goodbye.

“We were excited to meet him, even if it was only for an hour,” Sierra Yoder told The Washington Post. “We were just relieved he made it that far and we would get to meet him, living and breathing.”

But Bentley, his parents said, had other plans.

Now 7 months old, he is alive and alert after surgeons at Boston Children’s Hospital put together a plan for what one called the “granddaddy” of cases to place his brain back into his cranium.

“It was a life-saving procedure,” Mark Proctor, neurosurgeon in chief at Boston Children’s, told The Post. “But it will not restore a normal life.”

Indeed, Bentley will have struggles.

Encephalocele is a rare congenital disorder in which a baby’s brain herniates from the skull in the womb and the bones do not properly form around it. The portion of the brain that sits outside the skull is usually covered by thin skin or membranes, according to the National Organization of Rare Disorders.

The Centers for Disease Control and Prevention states that each year in the United States, about 375 babies – or one out of every 10,000 – are born with the malformation, which can cause mental and physical issues, vision problems, seizures and muscle weakness in the arms and legs. The cause is not known.

Like most neurological conditions, however, experts say there’s a spectrum from mild to moderate to severe cases such as Bentley’s.

Alan Cohen, head of pediatric neurosurgery at Johns Hopkins Hospital, said the herniated sac may contain brain, brain membranes and brain fluid. When the sac is filled with non-functional brain tissue, he said, a surgeon typically removes it. But when it contains vital brain structures, he said, the surgeon must find a way to put the brain back into the skull.

Dustin and Sierra Yoder, both 25, grew up together in Sugarcreek. Sierra Yoder said their mothers had been friends since high school and introduced them when they were 2. By 21, they were married.

Sierra Yoder said her first pregnancy and delivery were easy, and their son was healthy.

In December, they started planning for Bentley. “We were trying for a little boy or a little girl – we didn’t care,” she said. “We just wanted to make sure that Beau had a sibling.”

The next month, they were pregnant with one.

The second time around, Sierra Yoder said, things seemed just as normal. The baby started to kick – and kick. She and her husband argued over the perfect baby names.

At 22 weeks, Sierra Yoder said, she and her husband went to see the doctor. Her doctor squeezed goo for an ultrasound and took a peek.

Then, she said, he became somber – and horror hit them.

Yoder said it appeared that something was wrong with the baby’s head. Maybe he was missing his crown. Maybe more. It wasn’t clear. So, she said, she and her husband were sent to the hospital for further tests.

“I started bawling immediately,” she said. “I didn’t think he would make it.”

And neither did her doctors.

Neurosurgeons at a hospital in Canton explained Bentley’s congenital condition and told the Yoders that their baby had a slim shot at survival.

” ‘If he makes it,’ ” Sierra Yoder said the doctors told them, “‘he will not be compatible with life.’ We had no hope whatsoever.”

She said doctors urged the couple to consider abortion – and consider it quickly – because she was already so far along in her pregnancy. “That was the darkest part of the entire thing,” she said. “We decided to abort that day. We didn’t want him to come into the world and suffer.”

But the couple started to wrestle with their decision, still wondering whether they should abort or deliver him and hold him until he died. “The night before the procedure, I told Dustin I couldn’t do it,” Yoder said. “He had a big sigh of relief. He was very happy.”

Doctors gave them brochures for funeral homes in the area, including information on burials and cremations, Yoder said. She said she wanted him to be cremated, but she could not think about his death before his birth.

The couple agreed on the name Bentley Ross Yoder.

Now, here they were, only minutes from the delivery.

Since 8 p.m., Sierra Yoder had been in labor. She said the hospital room was filled with emotion – not sadness, but excitement about the baby boy they were about to meet, no matter how short their time would be together.

“We were all emotional,” she said. “We had been waiting for it for so long.”

Dustin Yoder cut Bentley’s umbilical cord. Nurses wrapped him in a blanket. No one cleaned him, measured him or suctioned the birth fluids from his throat. There was an urgency to get Bentley into his parents’ arms. Every moment the family had with him was precious. For all the Yoders knew, each one might be the last.

“He was perfect,” Sierra Yoder said. “It really didn’t matter how long we had. We were just thankful we got to hold him.

Thirty-six hours later, Sierra Yoder said, Bentley had not been put down; family members had been passing him around.

“We looked at the nurse and we said, ‘What do we do now?’ ” she said. Doctors told the family to take Bentley home and arrange hospice care.

Bentley did struggle with his health. Early on, his mother said, he was hospitalized with a respiratory virus as well as strep and staph infections in his lungs. At one point, he was put on a breathing machine and doctors feared that once they removed it, he would not be able to breathe on his own.

At about 4 weeks, Bentley saw a specialist at Nationwide Children’s Hospital in Columbus. After reviewing his MRI, Sierra Yoder said, a neurosurgeon told her that Bentley’s brain – both the portion inside his skull and out – was too damaged and he would not survive, “so at that point, we had no confidence.”

At about 4 months, he was taken to the Cleveland Clinic, where a surgeon told his parents that he appeared to be using his brain, but the surgeon did not know whether it could be safely put back into his cranium.

The baby, 5 months old at the time, had a pouch protruding from his skull that held a significant portion of his brain – the part that controls motor function and problem solving, and the part that controls vision. Unlike many encephalocele cases, Bentley’s mass, which was now buried beneath a blanket of golden curls, could not be removed; he was using it.

His Boston Children’s surgical team used 3D-printed models to plan out and practice their maneuvers. Meara said Bentley had 100 cubic centimeters of brain outside his skull, so the surgeons had to expand his cranium to fit it. They put together a plan to make several vertical slices in Bentley’s cranium and let it fall open, in a way, to make more room. Then, he said, special dissolving plates would hold the area open, and Bentley’s brain would slip back into his cranium.

On May 24, the team went to work. They shaved his curls and cut back the skin and membranes covering his brain. The portion outside his skull included a smaller part of the right frontal lobe and a larger part of the right occipital lobe, the neurosurgeon said.

The doctors drained cerebrospinal fluid from Bentley’s brain. Then they made the cuts in the cranium and eased the brain back into his head, Meara said, adding that the team took leftover bone from the cuts and criss-crossed them over the top of the head to close the gap.

In the waiting room, his family – parents, grandparents and big brother, Beau – had locked eyes on the surgeons who were walking their way. “When we saw them, our hearts dropped,” Sierra Yoder said, explaining that they had been told the surgery would take much longer. “We panicked.”

They went to see a bandaged-up Bentley, clad in a tiny hospital gown covered in cartoon tigers and lying in a hospital crib. “He was awake; he was looking at us, ” Sierra Yoder said. “He wasn’t cranky. He was just lying there, taking it all in.”

Almost a month since Bentley brain surgery, his mother said, he is now able to hold up his head. He’s eating. He’s smiling. He’s jabbering.

“His hair is growing back in,” Sierra Yoder said. “He looks like his brother now.”

No one quite knows what Bentley’s future will look like but, his mother said, but the Yoders have hope again. “Because of how different his brain really is, they have no one to compare him to,” Sierra Yoder said, adding that the doctors think “he will have a rewarding life. We just have to take it step by step.”