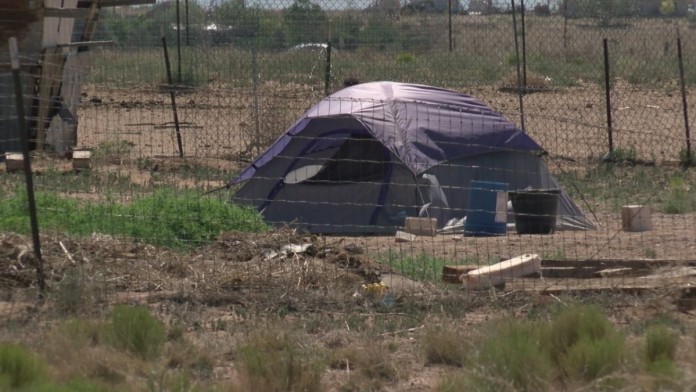 A New Mexico couple has been at the center of a parenting debate after they sent their 16-year-old son to live in a tent outdoors as punishment for bad behavior.

Jacob and Angela Boggus, from Belen, a small town about 30 miles from Albuquerque, said their son had been stealing from them and, when other forms of discipline failed, they banished him to the back yard.

“We’re not doing anything wrong,” Angela Boggus told CBS affiliate KRQE last week. “We are simply trying to teach our child a lesson.”

Jacob Boggus added: “If he doesn’t learn that now, it’s going to be the whole world’s problem – not just ours – in a couple of years.”

The Bogguses sentenced their son to one month in the tent.

During the daytime, he must stay in the tent, his parents told KRQE. The couple said he is given food and water and permitted to use the bathroom in the house.

At night, the parents said, he is allowed back inside to sleep. The teen has been living there for more than two weeks, according to the news station.

The Bogguses told KRQE that they gave their son the option to end his punishment early by writing five book reports on being respectful.

Temperatures in Belen are expected to reach a high of 99 degrees on Tuesday and then 100 degrees nearly every other day this week, according to the extended forecast from the National Weather Service.

Some neighbors in Belen have reported the parents to local law enforcement, but authorities have said that the couple has not broken any laws.

“I don’t see anything that is abuse or negligent,” Valencia County Sheriff’s Office Chief Deputy Gary Hall told KRQE, adding: “It’s not like he’s been banished out to the mesa a hundred miles away from civilization.”

Some in the community remain unconvinced.

One neighbor told KRQE that the unorthodox punishment was “a terrible thing,” and another called it “an awful thing to do to a human being.”

However, on the news station’s Facebook page, where many have taken to debate the topic, public opinion is largely in support of the parents.

“I think everybody’s situation is different, and if the parents thought this was going to work, they are the parents and they should be allowed to do whatever they want with their child as long as it’s not putting him in any harms way,” one wrote. “Why not?”

Another wrote: “There is so much stealing going on. Kudos to the parents for trying to help this child. If more parents would step in, we wouldn’t have so many young criminals in the area.”

Jacob Boggus told KRQE that the alternative to punishment would be to “let him run all over – and then he’s in your back yard taking stuff.”

“Anybody who wants to talk – who wants to try to talk some sense into him – is more than welcome,” he added. “We’re not trying to hide from this.”