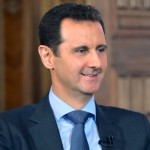 Former Finnish President Martti Ahtisaari told The Guardian that the U.S., U.K., and France were so sure that the regime of Syrian President Bashar al-Assad was about to fall in 2012 that they ignored a Russian-made plan in which he would step down as part of a peace agreement. A

“He said three things: One—we should not give arms to the opposition. Two—we should get a dialogue going between the opposition and Assad straight away. Three—we should find an elegant way for Assad to step aside,” the former Nobel Peace Prize winner said. Read more at The Guardian.