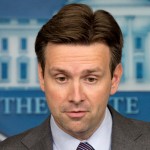 “[T]o make comparisons like that only serves to inflate ISIL and to buy into their fantasy that somehow they’re leading a war against the West on behalf of Islam. They’re not. That’s a fantasy,” Josh Earnest said on Monday.

A reporter asked Earnest about comments made Monday by Republican Mike Huckabee. Appearing on Fox and Friends, Huckabee wondered, “Could you imagine FDR going before Congress and saying, ‘We were attacked yesterday on Pearl Harbor. I really don’t want to talk about who did it, but you know, we just want to say that they were terrible people and they were thugs.”

At Monday’s White House briefing, a reporter quoted Huckabee, then asked Earnest, “do you think that’s a fair comparison?”

“I do not, and I think only to make — to make comparisons like that only serves to inflate ISIL and to buy into their fantasy that somehow they’re leading a war against the West on behalf of Islam. They’re not. That’s a fantasy,” Earnest replied.

“These — this is a dangerous organization that the United States and the other 65 members of our coalition have mobilized to counter, so the president and the leaders of countries around the world certainly takes this threat seriously. But it’s also important for us to recognize it for what it is, and I think that’s, you know, why the president has taken the approach that he has.”

Obama’s approach is to say that Islamic State terrorists are not Islamic. He refuses to use the term radical Islamic terrorism.

In his speech to the nation on Sunday night, President Obama said, “We cannot turn against one another by letting this fight be defined as a war between America and Islam. That, too, is what groups like ISIL want.

“ISIL does not speak for Islam,” the president insisted. “They are thugs and killers, part of a cult of death. And they account for a tiny fraction of a more than a billion Muslims around the world, including millions of patriotic Muslim-Americans who reject their hateful ideology.”

Obama said the way to defeat the terrorists who are intent on attacking us is to “enlist Muslim communities as some of our strongest allies, rather than push them away through suspicion and hate.

“That does not mean denying the fact that an extremist ideology has spread within some Muslim communities. It’s a real problem that Muslims must confront without excuse.”